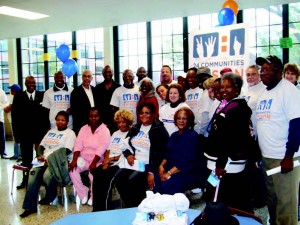 A political paradigm has shifted, and 24 towns in St. Louis County are reaping the benefits.

Fragmentation and self-imposed
isolation have long been norms in the
countryside that rings St. Louis city. The city itself set that tone in 1876, when it broke away from the jurisdiction of St. Louis County because city residents were disinclined to continue subsidizing their “hillbilly” counterparts.

Modern discussions about reuniting the city and county plod on, but 24 St. Louis County towns aren’t waiting around. They’ve stuck out their necks and are giving berth to several new concepts and processes that have lowered municipal expenses only as a first step.

Just as importantly, according to Chris Krehmeyer, the new thinking is improving the standard of living of residents by providing affordable housing, supporting children’s education and ensuring access to healthy lifestyle choices and health care.

Krehmeyer is the president and chief executive officer of Beyond Housing. The community support organization counts among its successes improving the affordable housing market in a number of cities in the region in defiance of the subprime mortgage mess and subsequent recession. It has addressed food inequality by building and revitalizing low-income housing, working foreclosure mitigation, even building a grocery store in an area where fresh produce had been scarce and overpriced. But there were more challenges in store.

A northern St. Louis County school system was stripped of its accreditation by the state in 2008 — jarring several community leaders into sharing their frustrations and talking about how to turn things around. Standing on its credibility, Beyond Housing offered itself as the backbone for the initiative.

“There was an appropriate amount of skepticism. People asked who are we, and why are we involved,” Krehmeyer said. “That’s why we did nine months of community engagement as the first step in the process.”

Normandy School District, an area already targeted by Beyond Housing as a geographic region in need of housing and community revitalization, agreed to absorb the displaced students. Then, with Beyond Housing as the facilitator, mayors and leaders of the 24 low-to-middle income towns in the district came together to brainstorm ways to ways to save on educational, law enforcement and housing infrastructure administration, increase their buying power and, generally, break the pattern of poverty. The initiative became known as 24:1, meaning, 24 communities with one vision.

“We believe that even if the school system does what it does, within its walls, very well, if families and neighborhoods are still struggling then it would make it pretty hard for the children to learn,” Krehmeyer said.

Normandy Mayor Patrick Green credits the gatherings that took place to realize 24:1 with providing an opportunity for the municipalities to collaborate on other issues.

“What we realized was that we were having trouble getting things done because of political roadblocks, and that we could remove them,” he said.

With Beyond Housing acting as a facilitator, Green said that participants went after what he called the “low-hanging fruit” relationship building. “We decided to try and remove the deadwood.”

A number of studies looked at the municipality’s commonalities, including purchasing and trash service, schools and law enforcement. That process broke down the dollars and cents of potential cooperation, and collected a compendium of who was doing what well.

With the intention of starting small, the first couple meetings of the group focused on rock salt. Where was everyone buying it? How much were they paying? Quickly, they discovered savings by joining with a city that was bringing it down the Mississippi River for a low rate.

“We joined together to assist the community to find housing, for efficiency and for cost savings. As we jumped into it, we realized wow, we’re able to share best practices,” recalled St. Louis County Executive Charles Dooley.

The group created some standards, calling on the Association of Small Cities to validate them. “From there, we identified where each of us was weak. Our goal was to pull each other up in those areas,” Green said. A key question the members asked themselves was, why do people choose to live in small cities?

“What we found was that people valued that small-town impact. They like the ease of getting answers to questions, and the ability to get a problem solved quickly,” Green elaborated. “Then we asked, are we more efficient than major cities?”

As they worked that direction, fuel, fleet management, safety, signage, lighting and street surfacing all came to the table. Eventually, discussion also came around to law enforcement.

No one was keen on the idea of giving up the identity of his or her local department, but nevertheless, discussion continued.

“We asked questions like, ‘What if you keep your name, but let our chief run it?’ Those conversations led to collaborative policing, which we have now,” Green said.

What it has allowed them to do is collaborate without political barriers and improve efficiency and effectiveness without the restriction of politics. Whether it’s about housing, or police, they can be efficient and effective and not allow politics to interfere in governance.

A recent survey revealed the extent to which St. Louis County has learned that valuable skill and quantified the savings.

More than 60 cooperative programs are saving taxpayers millions of dollars. Just one of those involves 33 coming together to buy road salt, for a cost savings in 2010 of $2,000,000. According to Dooley, cities that participate in an insurance trust are saving another $2,000,000 a year on health insurance, workers’ compensation liability and other insurance coverage, and 12 cities applied together for federal funds to replace municipal lighting fixtures with more energy-efficient models for a savings of over $100,000 a year.

Another barrier to effective and efficient government was perception. “One thing we didn’t need was negative PR, and people were self-imposing it. They’d say oh, because this is an African-American community, we can’t do it,” he said. Yet, when it came to lowering crime rates, they already had.

“We’ve had a 40 to 45 percent drop in crime in three years. But no one had quantified it. We had to challenge the perception publicly,” Dooley reported.

The communities are allowing Beyond Housing to lead the process, and the organization is paying them back with diligence and energy. Krehmeyer is focused on producing results and making an impact with their efforts.

“You have no idea how many meetings I sit through,” he joked. “But that’s what’s required. If you don’t have impact, then we’ll be just another good idea that never came to fruition.”