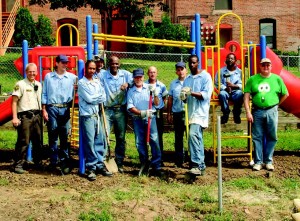 Community Restoration Program coordinator Don Rupe, far left, stands with a crew of inmates in front of a completed installation of playground equipment. Rupe has been instrumental in putting inmate work teams together and getting projects done across Scott County.

In eastern Iowa, one inmate rehabilitation program has won over residents, corrections officers and even the hard-working laborers.

Scott County Sheriff’s Office’s Community Restoration Program is now in its eighth year. The program first came together around the time plans were being made for the construction of Scott County’s Annex Jail, a process that Sheriff Dennis Conard recalled involved a lot of public input.

“The public wanted to see the inmates working,” he said.

Taking inspiration for their project from Hampden County Sheriff’s Department, which offers a variety of programs for their inmates, Conard’s team toured Hampden’s facility and looked at several of their programs. Then they started putting together their own and hired community restoration officers to oversee it. “Inmates get to work time off their sentence and we make sure the public is aware they are working. It’s been really great for them and us,” Scott County Chief Deputy Mike Brown said.

Inmates complete several tasks on a daily basis, and they have removed gang graffiti off of bridges, sides of buildings and underpasses in several Scott County cities. Large areas that became illegal dumping grounds have been cleaned up, and overgrown grass, mowed. They’ve planted flowers and completed repairs around Scott County Jail’s campus in addition to helping maintain city parks, roadsides, school playgrounds and community centers. During flooding that occurred several times in Davenport, inmates lent a hand by helping fill sandbags. Their efforts helped out tremendously, Brown said.

Currently, Community Restoration participants also serve as caretakers for three cemeteries within Scott County. One of those is Davenport’s downtown cemetery, so their labor saves the city money. The other two are abandoned cemeteries. One will remain an ongoing project for inmates, who are working on repairing and re-standing headstones that have been knocked down over the course of 100 years.

“(It) had been demolished, and they practically had to rebuild it,” Conard said. They also regularly mow all three of the properties.

Inmates selected for the program must be willing to actively participate, display good behavior and have minimum time left on their sentences. Their crimes are also taken into consideration. Classification officers help make the selections. According to Brown, so far there have been no problems with the participants selected. The inmates are also observed by correction officers while they are out completing the community services.

Initially, communities were sometimes wary of the presence of inmates, especially in the parks were children often play. That concern has abated. In fact, the sheriff’s office receives so many requests from cities all over Scott County for the crew to come work on various projects, that there is a waiting list. Citizens have also sent in requests, although those have to be declined.

“It’s picked up for them,” said Brown said. “Other jurisdictions love it since its not costing them anything to clean up areas.”

Davenport saved big time on a potentially expensive cleanup bill when inmates took care of a graffiti mess. It also saves the sheriff’s office money because they occasionally wash and wax squad cars — which are usually so well done that the cars look brand new when they’re finished, Brown noted.

Bicycle repair and gardening are side projects that have already grown out of the Scott County Community Restoration Program.

Coordinator and bicycle repair project advocate Don Rupe is an avid cyclist himself, and lends his expertise to teaching inmates how to rebuild, clean and repair the bikes, which are donated by Scott County cities and residents. Work is completed throughout the year, and the end results are distributed to kids participating in area nonprofits, including Quad-Cities’ Big Brothers Big Sisters and Friendly House. They’ve brightened many kids’ days, especially at Friendly House — where Santa hands them out to the kids who have bicycles on their Christmas list. Repaired bicycles are also given to individuals around the county who have lost their driver’s licenses, so that they can still get around.

“The idea has just grown,” said Brown. “Don has been very instrumental. He takes the job seriously, working from sun up to sun down, coming up with all these ideas like the bicycle project.”

The garden project came about after a large amount of land was cleared behind Scott County’s Annex Jail. From planting and weeding to watering and harvest, inmates are out daily maintaining the garden. The harvest goes to feed the jail population, its staff and needy families in the area.

Inmates enjoy the project. Brown noted that at one time there were 100 inmates out working in the garden all at once.

Overall, it’s hard to argue with Brown’s assessment that the Community Restoration Program has been positive.

“When I stop and talk with the inmates, they are smiling, have good attitudes – they are fired up to be out there.” Beyond helping their community, they pick up valuable skills, learn team effort and self-satisfaction in their work. “I got to believe it helps inmates who are trying to turn their lives around.” As for the program’s success, Brown credits those involved — particularly Rupe, “It would not work so good without the good attitudes.”