Members of the Lexington, Ky., Streets and Roads Department apply cold mix for an evaluation program. The department was looking to improve the overall handling process for potholes. It has so far reported that that UPM materials perform at a superior level. (Photo provided)

Back in July 2011, the Lexington City News posted an editorial titled, “Patching potholes is routine work for Streets and Roads crew.” The article pointed out that potholes are a fact of life. Sometimes, it seems, they are everywhere. While that is especially true in the spring, the truth is potholes are a year-round problem.

Striving to improve the overall handling process for potholes, the Lexington Streets and Roads crew initiated a cold mix evaluation program. The purpose was to identify possible advantages using alternative pothole repair material. Multiple parameters were considered in determining which candidate materials would be compared. The four primaries were survivability, workability, total cost and local availability. 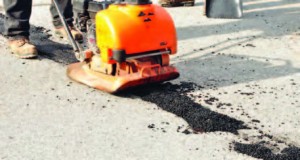 Early in the Lexington, Ky., evaluation program, it was determined that the UPM bulk material was superior to other candidate materials based on workability and survivability. The number of recorded potholes decreased 63 percent. (Photo provided)

The higher cost of Unique Paving Materials’ permanent pavement repair material was initially a detriment in considering premium cold mixes. However, if the labor and equipment commitment to street repair could be reduced through elimination of redundant repairs, the overall net gain would be substantial and far greater than the increased cost of material. The net result would be increased resources available to the city.

Early in the program it was determined that the UPM bulk material was superior to other candidate materials based on workability and survivability. The number of recorded potholes decreased 63 percent. Due to the observed performance differences and limited resources, it was decided to focus on the UPM material.

During the months of January through May of this year, the city spent $120,096 repairing potholes — about a third of the $328,309 it averaged in pothole-repair spending for the same period each year between 2003 and 2009. In addition to the savings, for the first time in nine years the city reported not receiving a single claim for vehicle damage or injury caused by potholes. The conclusion the department drew is that the cold mix material goes in the hole once, and stays there.

When considering candidate cold mix suppliers it’s important to note the different business strategies. When selecting a cold mix product, it is reasonable to assume there will be questions, training and general support issues. The UPM high performance cold mix is marketed as the leader in the industry by design and choice. Unique Paving Materials Corporation has maintained its level of quality and consistency since 1959 and plans to continue with unwavering commitment. Its quality control program guarantees each production of UPM will match target performance. Unlike hot mix asphalt specifications that may be state regulated and application specific, design and performance specifications for cold mix do not exist. Without an effective QC program, performance variability will be high. In addition to pothole count metrics maintained by the city, maintenance crews were asked to comment on overall handling and performance of the candidate cold mix products. After the five-month winter evaluation, all crews agreed the UPM material was superior to other cold mixes that had been used during the previous nine years.

Now more than ever, federal, state and local governments recognize the importance of spending their limited budgets on a product that works. While they understand they may pay a little more up front for a premium product, both the cost savings and fiscal responsibilities have provided enormous dividends for them and their departments in the eyes of administrations and the taxpayers. The total cost including pothole repair and re-repair should be considered in the cold mix selection process in order to maximize its value to the city. A lower cost product may save initial dollars, but its total impacting on a budget may be higher.