↓
Home→Conference / Expo→On the road to Anaheim: APWA 2012 Congress and Exposition 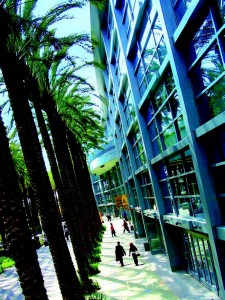 It’s a brutal responsibility to engineer, build and maintain America’s infrastructure. To improve their skills and renew their diligence in constructing cost-effective public services and structures, hundreds of the public works employees will gather in Anaheim, Calif., Aug. 26-29 for the annual American Public Works 2012 Congress and Exposition.

The 2012 APWA congress takes place in the birthplace of the American theme park. Organizers hope that the sunshine and creative setting will inspire participants to “defy the laws of imagination, turn the light on creativity, and illuminate the spirit which inspires us to continually shine within” as they network, learn and laugh during the four-day long exposition, training and congress.

This year’s gathering also marks the 75th anniversary of the national organization. Its auspicious beginning took place largely during the legendary public construction marvel of the White City, which housed the events and attractions of the 1893 Chicago World’s Fair.

During that dawn of urban planning, visionary men emerged who were committed to large-scale, planned, engineered capital-extensive, long-term solutions to municipal problems formed the American Society for Municipal Improvement in 1894. Its members collaborated on ideas and plans for paving roads, the value of modern mechanized equipment and processes for waste removal. Confirming the usefulness of working together, the organization grew at a healthy pace for over 30 years before reorganizing as a much larger entity now called the American Public Works Association, in 1937.

To commemorate 75 years of building better communities, the APWA invited local chapters from around the globe to bring a special memento to Anaheim that will be placed in a public works time capsule during a special ceremony.

Rounding out the week will be an exposition, educational sessions, tours of local facilities and opportunities for both networking and relaxation will round out “The Best Show in Public Works.”

The Expo Experience, featuring a technology pavilion, green pavilion, “Central Park” pavilion of innovative parks and recreation products, a new product showcase and a theater section where companies will present 50-minute sessions on products and processes will compete with product and service booths, providing public works professionals with an endless buffet of browsable resources and ideas. Three hours each day are even designated “non-compete times,” so that attendees can visit the expo without missing any educational opportunities.

Experts who have successfully navigated the challenges of storm water and flood control; solid waste treatment; street, roads and bridges; traffic engineering; utility and public right-of-way; water and waste water treatment; engineering and technology issues; environmental and sustainability issues; facilities improvement; fleet services; parks and grounds; management and other arenas will present attendees with best practices and tales of experience designed to make every city run smartly and efficiently. And not to be missed among all of the opportunities are four recognized keynote speakers, one for each day of the congress, who will set a tone of inspiration and determination so that participants return to their cities energized and prepared for another year.

Maximize the time away from the work site by stepping up to a tennis tournament or fun run, or attend the first-timers orientation, a get-acquainted party and other events that will facilitate conversation with fellow public works professionals. APWA members ages 35 and younger are also invited to the APWA Young Professional networking reception at 9:30 p.m. Aug. 27. From 5 p.m. to 7 p.m. the same day, don’t miss the organization’s annual awards and recognition ceremony and reception.

Full-conference registrants and Wednesday one-day registrants can also tour local facilities by signing up for field trips to the Metropolitan Water District of Southern California — Robert B. Diemer Water Treatment Plant, the Orange County Sanitation District Facility, the Caltrans District 12 Traffic Management Center and the Disneyland parking and transportation facilities, or learn about the port of Long Beach during a boating excursion.

No matter what issues your municipality is facing, it’s likely that someone attending the APWA International Public Works Congress and Exposition has faced it before. Come learn from their successes, their challenges, and even the occasional mistake while also imagining what your department will look five or 10 years from now. Late registration is still available at www.apwa.net/congress.