Re-HEAT is a cost-efficient and environmentally responsible alternative that delivers comparable pavement longevity to mill and overlay. It’s comprised of two pieces of equipment, a pre-heater and a heater/recycler. The total length of the pair is far less than larger, less nimble hot-in-place equipment options. (Photo provided)

In 2011, administrators of the city of Milwaukee, Wis., realized they could remediate many of their pavements using a process that recycles the existing asphalt in place. They knew that Re-HEAT hot-in-place recycling was a revolutionary process that would allow them to save money, omit the need for new asphalt, greatly reduce construction traffic by eliminating the need for any trucking and reduce the carbon footprint of roadways by 63 percent compared to the conventional mill and overlay approach to resurfacing.

This spring the city slated over 67,000 square yards of pavement to be recycled using the Re-HEAT process. The project included three roads with different makeups. One was heavily trafficked for industrial use. One was a minor arterial. Another was a four-lane split residential street. All were heavily oxidized, well over 10 years old and contained curbs and gutters with varying degrees of crack filler that had been used on them throughout the years.

The contractor performing the work was Chicago area-based Gallagher Asphalt Corporation. Gallagher Asphalt is one of the pioneers in the hot-in-place recycling industry and performs work from coast to coast all through the year.

Re-HEAT is a cost-efficient and environmentally responsible alternative that delivers comparable pavement longevity to mill and overlay. Re-HEAT is comprised of two pieces of equipment, a pre-heater and a heater/recycler. The total length of the pair is far less than larger, less nimble hot-in-place equipment options. The Re-HEAT operation is just over 80 feet long, allowing it to be used in municipal settings.

Re-HEAT begins with the pre-heater unit gradually heating the existing two to three inches of asphalt pavement to approximately 200 degrees Fahrenheit. The second unit, the heater/recycler, then gradually brings the temperature of the pavement up to approximately 350 degrees Fahrenheit, when paddles underneath the unit begin to collect the heated and softened material into a windrow where it is fed into an on-board asphalt drum mixer. 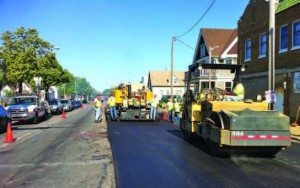 Another benefit of the Re-HEAT process is that by 100 percent recycling the existing asphalt pavement, there’s no need for a milling operation. The traffic congestion caused by hauling grindings away and transporting new asphalt to the job site is completely eliminated. (Photo provided)

Within the horizontal drum mixer, the rejuvenating oil is uniformly applied and thoroughly mixed while the heating process is maintained within the drum. Less than a minute later, the recycled hot mix is then distributed out of the drum onto the pavement where it is augured and put through a traditional asphalt paving screed. The paving screed ensures proper slope and grade is delivered to this final surface course. Immediately following the second unit is a traditional steel drum vibratory roller that achieves specified density.

“Municipalities are intrigued by the Re-HEAT process and know that they have plenty of streets that are candidates for using it,” said Pat Faster, Hot-in-Place national sales director for Gallagher Asphalt. “We estimate that by using Re-HEAT instead of milling and overlaying most agencies are saving over 20 percent. With budgets for maintaining roads getting slashed in today’s tougher economic climate, they can’t ignore a process that truly delivers real savings without having to sacrifice the service life of the pavement.”

Another benefit of the Re-HEAT process is that by 100 percent recycling the existing asphalt pavement, there is no need for a milling operation and the numerous trucks associated with it. Nor is there a need for any trucking of asphalt materials. The result is that the traffic congestion caused by hauling grindings away and transporting new asphalt to the job site is completely eliminated. Soon after the pavement is rehabilitated, it is opened up to traffic. “That’s a huge advantage over the conventional approach of mill and overlay,” Faster said.

For further information about Re-HEAT and Gallagher Asphalt Corporation, visit www.hotinplacerecycling.com and www.gallagherasphalt.com, or contact the author, Pat Faster, at (708) 878-8783 or email him at pfaster@gallagherasphalt.com.