↓
Home→Transportation→Cities tackle challenges of competing demands for road use 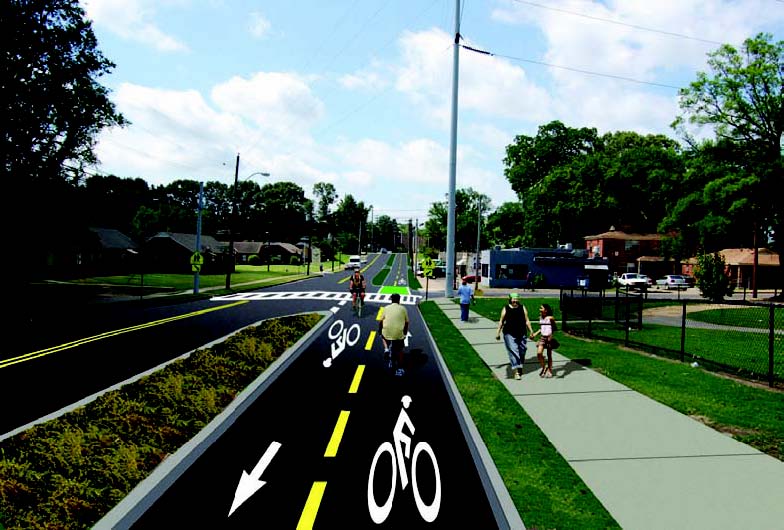 Concept art of the proposed Overton-Broad Connector, showing what the finished green lane may look like. Nationwide engineers and designers are beginning to really figure out what works as far as mapping out routes markings and how to use signals. Roskowski states the Green Lane Project’s cities will be further advancing this craft.

In recent years, U.S. cities have begun work to make their streets safer for bicycles. The reasoning for this varies from city to city but the commonalities include safety concerns, decreasing budget sizes, the realization that they cannot endlessly add to the existing asphalt, increasing attractiveness for young people and high-tech companies, increasing public health and to create an identity. In recent years bicycles have moved up on everyone’s radar, according to Martha Roskowski, Green Lane Project director.

This past May, the national, nonprofit Bikes Belong Foundation, a division of the Bikes Belong organization, launched the Green Lane Project with the goal of increasing bicycle ridership nationwide through promoting the use of green lanes or cycle tracks. Unlike regular bike lanes, green lanes increase bicyclers’ safety by adding a layer of protection between them and the vehicular traffic. The practice places a variety of items between them, from new curbs and landscapes to plastic poles and parked cars.

“It is a new tool in the U.S. toolbox,” said Roskowski, noting that Europe has been using green lanes for 40 years.

Engineers and designers across the nation are challenging themselves to come up with efficient, functional and safe designs to fill the needs of bicyclists, pedestrians and drivers. For many it’s uncharted territory, but resources like the National Association of City Transportation Officials’ “Urban Bikeway Design Guide,” which uses the best cycling cities in the world as references, and the experiences of other U.S. cities provide some guidance. However, engineers and cities must use their own engineering judgment and tailored plans to fit the individual situation.

Green Lane Projects fit into different categories, which include resurfacing or operational improvements, that do not require a lot of public process and can be quickly installed; improvements to existing bike lanes from adding room to installing larger buffers or plastic poles; new lanes as part of a major reconstruction project, which can be quite expensive and take time to complete; and simply changing the way transportation moves like removing a lane, which can spark intense public reaction and takes time as well.

To encourage collaboration, promoters of the Green Lane Project selected six cities out of 43 applicants to represent its goals. The cities wishing to participate had to have certain characteristics: they needed strong political support, their transportation staff and head needed to be on board, they needed to already have a plan in place, some of their projects needed to already be started, and the community needed to show support. In the end, Austin, Texas, Chicago, Ill., Portland, Ore., Memphis, Tenn., San Francisco, Calif., and Washington D.C., were chosen. According to Roskowski, all six cities offer a variety of geographic locations and are in various stages.

That variety is represented easily by Chicago and Memphis, which are projects that Roskowski describes as being “really exciting.” 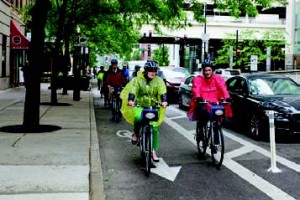 Bicyclists take to the Kinzie Street green lane in Chicago, which is protected by a wide buffer and plastic poles. Currently, there are 60 protected lanes in the U.S.

Chicago Mayor Rahm Emanuel led the call for bicycle-friendly roadways by stating his desire to build 100 miles of protected bicycle lanes during his four-year term — a goal supported by the Chicago Department of Transportation.

Chicago’s challenges include narrow streets whose premium space is already spoken for. That situation means that either parking or lanes have to be eliminated, which can spark controversy. Buffered bike lanes, that were first installed in 2011, have been a useful solution since they can be installed on streets that are too narrow for protected bike lanes. They still provide bicyclists with additional comfort and protection by applying a striped buffer on one or both sides of the bike lane.

During May and June, C-DOT’s monthly bicycle counts showed increases in ridership at six locations during the morning and evening hours. According to C-DOT’s 2011 Year in Review report, 49 percent of bicyclists also felt that motorists’ behaviors had improved. There is potential for 19.4 more Green Lane miles to be added by the end of 2012.

Harahan Bridge modifications will be a game changer for the city of Memphis, connecting two cities, two counties and two states with a pedestrian and bicycle pathway.

In 2008, Memphis received a wake-up call when it was named one of the worst cities for riding by Bicycling magazine. After receiving that distinction, Mayor A.C. Wharton launched a turnaround and installed 35 miles of bike lanes in 2010 and 2011. Currently, Memphis boasts a total of 149 miles of bicycle and pedestrian facilities, including bike lanes, shared lanes, shared use paths and walking paths. Focus is being given by the city on completing more new bike facilities.

“The city is really excited about being a part of the Green Lane Project,” said Kyle Wagenschutz, who notes that Memphis has begun to recognize the growing need for separation by bicyclists.

It has partnered with the nonprofit organization Livable Memphis to bring about the changes. The project that’s the furthest along is the Overturn-Broad Connector. Sarah Newstok, program manager for Livable Memphis, stated that LM decided to pick up the project since it was important to the community and it was essential that it be done right the first time. Newstok expects the implementation of the connector to begin in the spring of 2013. When it’s complete, it will provide bicyclists with safe travels from Shelby Farms Park to Overton Park. Bicyclists will also be able to travel along Broad Avenue, where there is an art district.

Another major upcoming project for Memphis is the modification of the currently unused Harahan Bridge into a 12-foot wide bike and pedestrian pathway that connects downtown Memphis to downtown West Memphis. The modified bridge, which crosses the Mississippi, would connect two cities, two counties and two states. In June the city received a federal grant that will pay for half the project. Construction is expected to take three years and will start in 2013.

Wagenschutz describes Memphis as the odd man out among the six Green Lane Project cities since it is one of the smallest. “Memphis is a newcomer, and we have lots to learn,” he said, adding that the Green Lane Project has been good for guidance. “It has allowed us to learn and has set us up to be an example.”

For its efforts, Memphis was recently named the most-improved city for biking in the U.S. Newstok noted that the opportunity has been brought about by an increase in bicycling culture and the willingness of the city and the new administration to bring about change.

“We definitely have no plans to be stopping any time soon,” Wagenschutz said.

The Green Lane Project is a two-year project that will end in December 2013. By then, Roskowski and her colleagues expect to see at least 50 projects completed by the six cities, along with a significant increase in bike ridership. Several studies will also be conducted in the participating cities that detail changes in traffic and ridership as well as safety concerns. The design plans of successful green lanes will also be posted online.

“There will be a significant increase in the knowledge base and resources available for other cities to get their own projects on the ground,” Roskowski said. “These six cities work together, collaborate and solve problems. We will take what these cities learn and share with everyone else.”