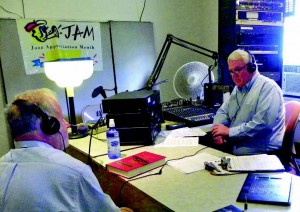 Jeff Rosenzweig, left, a criminal defense attorney in Little Rock, Ark., chats with Robert Kim Combs executive director of Arkansas Time After Time group. Rosenzweig does a significant amount of trial work defending those accused of sex crimes and representing those on the sex offender registry. Combs is host of ATAT’s weekly talk-radio show, “It Could Be You.”

Statistics on recidivism, the act of repeated or habitual relapse, are frightening, with national averages hovering around 60 percent.

In the U.S. in 2001, 600,000 individuals—roughly 1,600 a day—left state and federal prisons to return to their communities. In 2009, 729,295 inmates were released, for an average of 1,998 per day. With prison populations growing by nearly two percent annually, the social challenges posed by reentry constitute grave concerns for public safety.

Data suggests that second to drug addiction- related re-offenses, the key reason for a probationer or parolee to reoffend is the lack of employment. Without an income, ex-offenders can’t afford housing, support families or meet other conditions of supervised release — which sets them up to go back to jail.

“Both the public and private sectors have an important role to play in the reentry process,” said Robert Kim Combs, executive director of Arkansas Time After Time, an organization that advocates for the reform of laws that pose unintended but devastating consequences to a successful transition process. “We need to put these folks to work.”

Combs, who also serves on the steering committee of the Central Arkansas ReEntry Coalition, is an ex-offender himself. He is well versed in the multilevel complexity of the re-entry process.

ATAT focuses its advocacy on one specific type of ex-offender. “We are advocates for those on the sex offender registry,” he explained. “The laws and policies which regulate their conduct, even after probation is complete, are doing grave harm to their spouses, children, parents and extended family members. Employers and landlords shun them. Classmates bully them. Neighbors ostracize them and sometimes, because of social stigma, vigilantism and violence result.”

According to Combs, nearly all leading experts in the field of post release sex-offender management agree that debilitating containment policies do nothing to promote community well-being or ensure anyone’s safety.

“Every time you hear a report on the news about another sex crime, it’s proof that our current laws are not working,” Combs asserted. “And recidivism data on sex offenders tells a very different story than what the public is generally led to believe.”

For example, former sex offenders have only about a three percent recidivism rate, which stands in stark contrast to the 60 percent national average for all exoffenders.

“In context of the superrestrictions placed on these individuals subsequent to their release from prison, this very low percentage of reoffenders shows how hard these registrants work to stay in compliance with the law,” Combs affirmed.

Still, employing those who are recently released from jail or prison raises countless flags for human resources officers. Can this person be trusted? How will we know if we’re being scammed? And, in light of recent EEOC policy clarifications, is our hiring policy in compliance?

Contrary to public opinion, the vast majority of offenders released from incarceration are highly motivated to make a successful transition and are earnestly seeking a second chance. Many have professional skills in the construction, food service, agricultural and industrial trades, acquired in prison training programs. Others have carry-over expertise from a former career, such as accounting, health care, or legal work, which they may be prohibited from practicing again but could provide solid footing for a new profession.

In every instance, what is most needed to empower a successful transition is the opportunity for these individuals to build new capacities and earn their way back into society as productive members of the mainstream workforce. 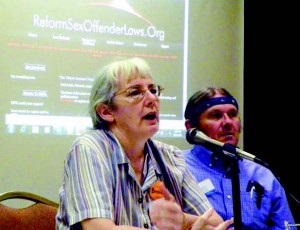 “Many employers tell me that they just want somebody they can rely on to show up and do the work they’re assigned,” said Combs. “In this context, those on parole or probation are ideal candidates because maintaining employment is often a requirement of their release.”

In addition to employment monitoring, most forms of supervised release require participants to subject to drug testing. They are eligible for bonding by the government, which is free of charge to the employer and usually qualifies the company or organization for special tax advantages. For details, visit www.NationalReentryResourceCenter.org.

In April, the U.S. Equal Employment Opportunity Commission issued new enforcement guidance, updating the standards regulating criminal background checks and clarifying critical information on how employers are to apply the new EEOC policy to their daily decisions when considering criminal records and employment. For example, the EEOC has ruled that employers may not have a blanket policy to exclude ex-offenders based solely on the existence of a prior conviction. Thus, it’s now considered a best practice to remove the “have you ever been convicted of a felony” check box from employment application forms.

“Doing the same thing over and over again and expecting different results,” Combs chided. “Still, as a society, we must put this wisdom to practice. These problems can and will be solved by following the science and incorporating well-reasoned approaches, which is why I would like to invite everyone concerned with this issue to attend the 2012 Reform Sex Offender Laws National Conference, held in September of this year, in Albuquerque, N.M.”

The RSOL conference will offer attendees a unified approach to better understand the complexity of current thinking and find workable options with “a collaborative think-tank of proven ideas and best approaches to making all communities safe and abusefree.”

Christine Beems, communications director for Arkansas Time After Time, contributed to this story.