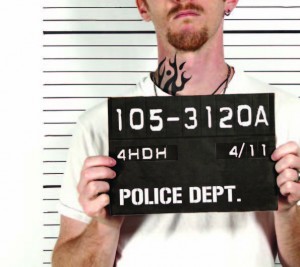 As technology evolves, information is becoming more accessible. But some of that information most people wouldn’t want dredged up, like their mug shots.

Booking records and mug shots fall under public records laws, which allows publications to publish them in their original form under the First Amendment to the U.S. Constitution. Despite their legality, though, some individuals question whether the publications hold any value for law enforcement. Some even see them exclusively as detrimental.

A variety of mug-shot print publications exist, appearing largely in southern states. They’re sold in convenience stores and bear colorful names like “Busted!,” “Sinful Saints of the Quad Cities” and “The Slammer.” Most share similar goals of increasing the public’s awareness of local crime and garnering tips for law enforcement. Everyone who has ever had their mug shot taken is fair game, minus juveniles, and those with particularly striking mug shots might find themselves featured on the front cover. The mug shots and booking records are obtained through public information requests from area law enforcement agencies.

“The average public loves it,” says Rayme Traub, founder of “The Sinful Saints of the QC,” which covers the Quad Cities area of Iowa and Illinois. “I have a hard time keeping it on the shelves.” As for why it is so popular, Traub compares the publication to an entertainment news show. “It’s the TMZ of mug shots.”

Kyle Prall, a representative from “Busted!,” a publication that appears in Austin and Dallas and covers 29 states online, also noted positive feedback.

“We sell over 7,000 copies per week, and we have received numerous compliments on the paper from both the general public and law enforcement. We have helped solved several major crimes, including generating tips for a murder — and (were) directly responsible for apprehending several wanted sex offenders.”

Isaac Cornetti from “The Slammer,” which is available in select areas of Arizona, Texas, Kansas, Florida, Ohio and North Carolina, has had similarly positive response to the product. “People in a community appreciate knowing who has been arrested and charged with crimes.”

Beyond local mug shots of interest, the three publications also include local 10 most wanted lists, local and national missing children and persons, local crime stories, local sex offenders and public safety-related articles. According to Prall, “Busted!” also receives many requests from law enforcement to run information on particular crimes or the pictures of wanted individuals to generate tips. 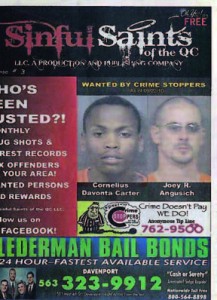 “Sinful Saints of the QC” merged with “The Slammer” but will continue to cover the Quad Cities of Iowa and Illinois. So far, it has seen great success generating tips for Crime Stoppers of the Quad Cities. No offense is too small or too big to warrant inclusion in the magazine, according to founder Rayme Traub. “If an adult gets a mugshot in my area, I’ve got it.”

Traub is amazed with how “Sinful Saints” took off, achieving success with its inaugural release.

“On the front page — very first issue — we featured a guy who had been wanted for two years with no information. Then when he appeared on the front page, Crime Stopper’s lines blew up. He was arrested within a month.”

He shared another story of how a mug shot alerted a father to his son’s misdeeds, which the son had been hiding. Similarly, a mother noticed her estranged daughter in one of the issues, was able to reunite with her and get her into a drug treatment program.

Despite these positive outcomes, it isn’t surprising that some people are not pleased when they see their mug shot in a magazine.

“When ‘The Slammer’ is introduced to a new market, people there are unpleasantly surprised that their arrest information is no longer secret,” Cornetti said. “People need to understand that arrest information is a matter of public record, (and) this has always been the case. We would hope that “The Slammer” serves as a deterrent to poor decision making.”

Not every law enforcement agency has seen a boost from local mug-shot publications, though.

“We see no value to the Scott County Sheriff’s Office from the magazines. To date, they have not assisted in any apprehensions.” Scott County, Iowa, Sheriff Dennis Conard said. He also noted that residents already had easy access to mugshots through the sheriff’s office’s website. On the other hand, there have been no problems with the magazines in the Scott County area.

But Detective Scott Williams, public information with the Moline Police Department and coordinator for the Crime Stoppers of the Quad Cities is supportive of the publications. He feels mugshot magazines have their place — especially when they feature felony warrants.

“Mug-shot magazines hold value for law enforcement by placing individuals with active warrants for felony crimes in print. It often is the nudge needed by an individual to turn himself in. It also reminds the community these individual are out and about and could be worth a reward if they call their local Crime Stoppers. We here at Crime Stoppers have received many calls generated by these types of publications.

“These magazines catch the public eye just like our website, fugitives featured on TV and fugitives on billboards do,” Williams added. “The public wants to see those who are charged with a crime answer for the crime. The fact they may know one of the individuals listed or someone who knows these individuals feeds a questionable desire for some. We believe shame can be a deterrent to crime. I certainly doubt it encourages anyone to commit a crime so they can see themselves in print!”