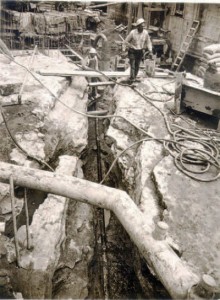 Construction workers are seen here during the construction of Dale Hollow Dam, which was built between early 1942 and the end of 1943. (Photo courtesy U.S. Army Corps of Engineers

William Dale, a veteran of the War of 1812, settled in Willow Grove, Tenn., in 1808. Dale, a government surveyor, came to the area to survey the boundary line between Tennessee and Kentucky. Dale’s 499-acre farm grew into a plantation known as Dale Hollow. He and his descendants lived there until dam construction began in 1942.

When the dam was completed, the waters of the Obey River and a tributary, the Cumberland River covered the Dale Farm and Willow Grove completely. The town of Willow Grove is now famously now known as the “the town that drowned.” In a shallow part of Dale Hollow Lake, the bricks and foundation of the town’s former school can still be viewed.

“The dam was initially built for flood control and hydroelectric power,” stated Stanley Carter, Dale Hollow Dam senior electrician. Authorized by the Flood Control Act of 1938, work on the dam was completed in 1943 by the U.S. Army Corps of Engineers, headed by USACE chief Lt. General Eugene Reybold and private contractor Morrison-Knuddson Construction Company. It was 1,717 feet long, 185 feet tall and cost $28,105,406 when it was finished. 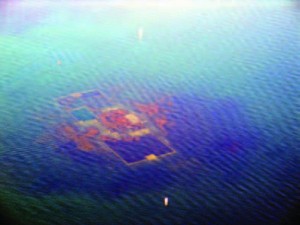 In a shallow part of Dale Hollow Lake, the foundation stones of the old Willow Grove Schoolhouse are visible. The town of Willow Grove was flooded to make way for the Dale Hollow Dam in 1942. (Photo courtesy U.S. Army Corps of Engineers)

Workers came from all over Tennessee and Kentucky to fill the hundreds of jobs created by the around-the-clock construction of the dam. Due to World War II, though, the hydroelectric power plant’s construction and operation was delayed until 1948. Subsequent power-generating units were added in 1949 and 1953.

The power plant has three generators that produce 20,000 MW of power each. The dam successfully supplies 69,000 volts of “peak generation” power that is transmitted to an electrical grid and then to local utility companies in Tennessee and Kentucky. The peak generation hydro-power fills in the gaps of the Tennessee Valley Authority system. The dam, power plant and reservoir are currently operated by the Nashville District of the Corps.

The dam’s man-made reservoir, Dale Hollow Lake, offers recreation and industry that brings in millions of visitors and tourism money to the area each year. The USACE developed and still maintains full-service campgrounds that are a mecca of fishing, boating, waterskiing, horse trails, boat launches and picnic areas.

Clear, pure water is a top priority at Dale Hollow Lake. The lake covers about 27,700 acres and is one of the nation’s premier bass fisheries. Other common fish in the lake are walleye, black bullhead, rainbow trout, sunfish and catfish. The surrounding Dale Hollow area has 24,482 acres of land of wildlife habitat. Wildlife in the region includes wild turkey, eagles, great-horned owl, mallard duck, pileated woodpecker, ruby-throated hummingbird, bobcats, bats and white tailed deer. Stephen Beason, resource manager at Dale Hollow Lake, remarked particularly on the area’s Eagle Watch Program. “Our area has the second largest population of overwintering bald eagles in the U.S.,” he noted.

The Dale Hollow Dam was the first of three multipurpose projects in the Upper Cumberland Basin to be completed during and shortly after WWII. Center Hill Dam was finished in 1948, and Wolf Creek Dam in 1951.

Given its years, the Dale Hollow structure is in remarkable condition. “The aging infrastructure is still in good shape,” concurred Jeff Flowers, power project manager of hydroelectricity. “No major equipment failures have occurred here. The early design was good. The generators had a life expectancy of 30 years and they’ve gone beyond that.” Personnel who monitor all equipment and operations at the facility daily attest to the same.

The dam’s viability was demonstrated again in the spring of 2011 when flooding occurred on the Mississippi and Ohio Rivers.

“The Dale Hollow held back a tremendous amount of water in order to help dissipate levels of water,” stated Lee Roberts, public affairs specialist USACE. “It lessened the amount of water flowing into the lower Ohio River,” added Carter.