Soon the question may become obsolete due to the growing trend of banning plastic bags in cities, states and even countries. 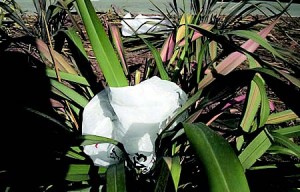 Over 70 cities in the U.S. have banned or are planning to ban plastic bags from retail stores. In addition, consumers in some areas are being charged five cents for one alternative — paper bags — to help offset the product’s cost to retailers and to encourage consumers to switch from both and use reusable bags exclusively.

Each year, consumers around the world utilize 500 billion plastic bags. WorldWatch Institute estimates that about 100 billion of those are used and discarded in the U.S. alone, at a cost of 12 million barrels of oil.

“Plastic bags never go ‘away’ – there is no ‘away’ for plastic,” explains Ted Duboise, publisher of the Plastic Bag Ban Report. “It does not decompose, degrade or die. Plastic bags are harmful because marine animals, seabirds, and land animals ingest the plastic bag, which then blocks their stomach or digestive system, causing the animal to die. Also, plastics break into tiny particles and has a high potential for contaminating soil, waterways and our oceans as they may contain additives such as persistent organic pollutants.”

According to the Honolulu Strategy, a global framework for the prevention and management of marine debris, the problems caused by marine debris are multifaceted and essentially rooted in inadequate solid waste management practices, product designs that do not consider life-cycle impacts, consumer choices, accidental loss or intentional dumping of fishing gear or ship-generated waste, lack of waste management infrastructure, littering and the public’s poor understanding of the potential consequences of their actions. 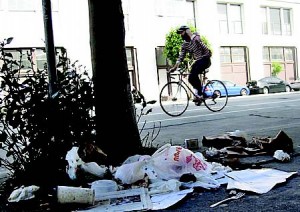 Six dozen U.S. cities and several foreign countries have moved to ban the use of plastic shopping bags due to their environmental impact and how they litter city streets and the world’s oceans. (Photo provided)

Holly Chisa, a Washington lobbyist for the Northwest Grocery Association that represents several large grocery stores such as Fred Meyer, QFC and Safeway, supports the plastic bag ban partly due to failed attempts by retailers to encourage consumers to recycle them.

Not many people return their plastic bags to stores, either. According to the EPA, the recycling rate for “bags, sacks, and wraps” in 2010 was 4.3 percent, down from an already-paltry 6.1 percent in 2009.

According to Beth Terry, author of www.myplasticfreelife.com, it’s not that easy or environmentally sound to recycle the bags anyway. She says that plastic bag recycling rates are low because community recycling programs cannot recycle them due to their tendency to jam machines. 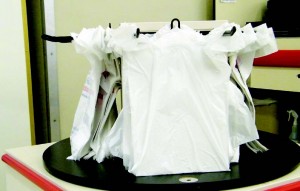 Consumers have proven largely unwilling to participate in opportunities to recycle plastic bags, and the bags tend to jam recycling machines anyway says Beth Terry, a blogger who follows the issue. (Photo courtesy of Ted Duboise)

Terry says areas such as Washington, D.C., that have decided to charge for plastic bags instead of banning them have had success in reducing their use. The nation’s capital even instituted a program to give low-income families reusable bags — a common step municipalities have taken to transition the public away from plastic bag dependency.

According to Duboise, the short-term municipal benefits of banning plastic bags include cleaner streets, less litter and less solid waste going into landfills. The longterm benefit: Plastic doesn’t drift into the oceans.

“According to UNEP, in 2006, 80 percent of the plastic debris in the oceans was landbased — meaning that as humans litter, that litter blows and drifts eventually into our oceans,” said Duboise. The United Nations Environment Programme has also stated that it’s estimated 146,000 pieces of plastic per square mile are floating in the ocean.

Two key steps for a successful transition away from plastic bags are education and public awareness, Duboise added.

“Municipalities such as San Jose and L.A. County, Calif., that have offered strong educational programming for their citizens and (have) retailers that explain how and why they are banning plastic bags, have had smooth and successful transitions,” he said.