Most local and county governments wrestle with the rising cost of waste disposal, including trying to figure out how best to go about recycling in the most cost-effective manner. But some municipalities have launched successful community-wide recycling programs.

In April, Chicago, Ill., Mayor Rahm Emanuel announced that curbside recycling would be extended to roughly 340,000 Chicago households that had previously not been part of any municipal recycling effort. Those home will be provided with recycling bins, the contents of which will be picked up on a regular schedule by the city.

The expansion of Chicago’s recycling program is possible thanks to $2.2 million in savings acquired through what Mayor Emanuel called “managed competition” between private recycling and waste managing companies and streets and sanitation employees. The recycling project will be put into effect by the end of next year.

The city has also placed public recycling bins on several of the city’s streets for residents to voluntarily deposit items like soda cans and plastic bottles.

City council members in Des Moines, Iowa adopted 12 goal statements in 2006 — one of which was for Des Moines to become a sustainable, green community. In 2007, they concretely advanced that goal by adopting an Energy Conservation and Environmental Enhancement Policy that provided goals and a number of principles based on the built environment, the natural environment and property management, acquisition, and disposal.

Des Moines has also been using 30 percent post-consumer waste recycled paper for all of its printing needs since September 2007. That choice will cost $2,720 more in the coming year than the use of non-recycled paper, but it will also have several positive environmental impacts: 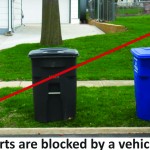 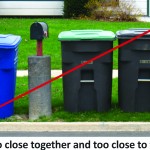 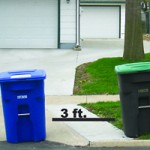 To help avoid program delays and make it easier to recycle, Des Moines, Iowa, issued a brochure for residents to use as a guideline. These photos depict the right way and the wrong way to place curbside recycling bins in Des Moines.

In 1994 the city embraced curbside recycling, after testing its potential by way of a sort of a curb program that included a number of drop-off sites. The drop-off sites were phased out by 2000 due to high contamination rates, but in 2008, the city went to single-stream recycling, according to Jay T. Bennett, sanitation administrator for the city.

“A private company receives our recyclables by contract. Pricing is based on a percentage of the market price published at the first of the month,” he explained.

When asked what advice he would give to a city that is thinking about starting any kind of recycling program, Bennett recommended knowing your city’s waste stream and the market as well. There are several types of curbside recycling programs, including curbside sort, single stream, dual stream, and not all of them are a good fit for every community.

“Knowing the waste stream can help city’s define what program may be more cost effective too,” he said.

Minneapolis has a multisort residential recycling program, with the majority of collection done in alleys and a small portion of it done at the curb on an every-other-week basis. This service eliminates the need for the city to provide recycling drop-offs for residents.

According to Matt Lindstrom of the city’s communications department, Minneapolis has received strong market revenues from its private recycling processor that have helped offset collection costs. Still, Lindstrom said Minneapolis’ residential recycling rate is near 18 percent, which remains below the 35 percent target set by Hennepin County and the state.

“The multisort recycling method is very demanding on residents to separate recyclable items for collection, and in turn, requires significant sorting by city crews at collection points,” he said. “So the city is pursuing an improved method of recycling that will hopefully increase participation.”

Lindstrom also has advice for any city thinking about starting any kind of recycling program.

“A city that is thinking of starting a recycling program needs to conduct a significant research campaign. Consideration should be given to contracting with a consulting company specializing in recycling to provide a recycling assessment. This assessment would gather information on items, such as service providers, method and frequency of collection, bins versus carts, municipal operation versus contracting, capital investment, markets, etc.,” said Lindstrom.

The percent of recyclable material that the city of Des Moines, Iowa, would like to see in its waste stream.

The target residential recycling rate set by Hennepin County, Minn., and the state. Currently the county’s largest city, Minneapolis, has a rate of near 18 percent.