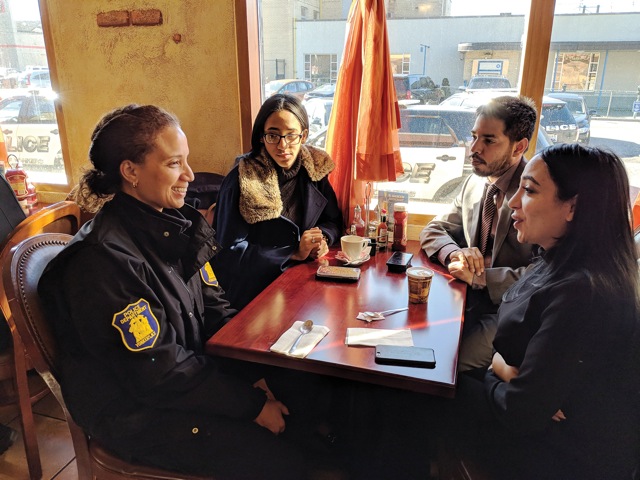 Snapshot of YPD and issues

The Yonkers Police Department has 611 sworn members and the police commissioner is Charles Gardner. Politopoulos said it is considered the fourth largest department in the state with multiple precincts and special units.

“We place priority on community policing — we have 35 different outreaches—programs allocated a lot towards community outreach. We think it’s important to engage with our residents,” he said.

Politopoulos believes some of the biggest issues the department faces include how it investigates and processes crimes regarding juveniles as laws are rapidly changing and elevating the age of responsibility.

The other issue it faces, like most departments, is adapting to the fact that most everyone “has an HD recording device in their pocket and everything is livestreamed so police matters are being broadcast live to the world.”

He said, “Personally I’m pro-surveillance — especially body cams — I think it’s important to document those events for legal reasons,” but where the problem comes in is when residents are livestreaming as the scene is unfolding.

Overall, Politopoulos believes social media is a good thing, with the average citizen communicating more with city government. They can now tweet or post on Twitter or Facebook when there’s a pothole, whereas in the past, they had to call or write a letter and it might take a month or so to get anything done.

“Now they can take a photo and post it, and two days later, it might be fixed,” he said.

However, he said people need to temper their expectations. They often want instant gratification and that’s not the reality of how government or investigations work.

He also mentioned how social media posts are being broadcast “as news without verification.” He gave an example of a recent occurrence where “something as benign as a traffic stop” was being reported on social media as a shooting.

Social media is great for the incredible amount of information that’s available and for holding government responsible and accountable, but as for socialization of human beings and non-verification of facts and news, he fears there’s a lot of potential to cause harm. “So there are pros and cons,” he said.

When asked about any negatives to Next Door in particular, he said one of the issues he’s seeing is how people classify suspicious incidents.

“We train people on what suspicious behavior is — a person alone, no matter race or gender, is not necessarily suspicious but his or her activity might be. For example, someone jogging in the neighborhood at 2 a.m. is probably okay, but two teens looking into several cars at 2 a.m. is probably not okay,” he said. “Because Next Door is very community focused, (users) are hyper-alert. We just don’t want it to evolve into very benign behavior being reported as suspicious.”

Politopoulos added he would recommend other police departments — especially cities the size of Yonkers or smaller — to partner with Next Door if they have that opportunity and to be engaged with all social media platforms.

“The goal is positive messaging,” he said.

However, there needs to be one person dedicated to monitoring it day and night and over vacations, etc. “You don’t want a message coming in and have it go unanswered for a week,” he said, adding it can’t be done halfway; one has to stay on top of it.

It’s important to engage users, read the comments and respond for intelligence purposes, and he said there is a lot of volume to go through. In his department, he’s the one in charge.

Because social media use is increasing more and more every year, he said, “I’ve become a secondary dispatch center.”

Bottom line, social media “is here to stay” so he advises using it to the best means possible. “We’re trying to use Next Door as a tool and get the correct information out there. Thanks to Next Door and all social media, we’ve increased our communication with our residents.”

NEXT: Finding the public safety personnel of the future