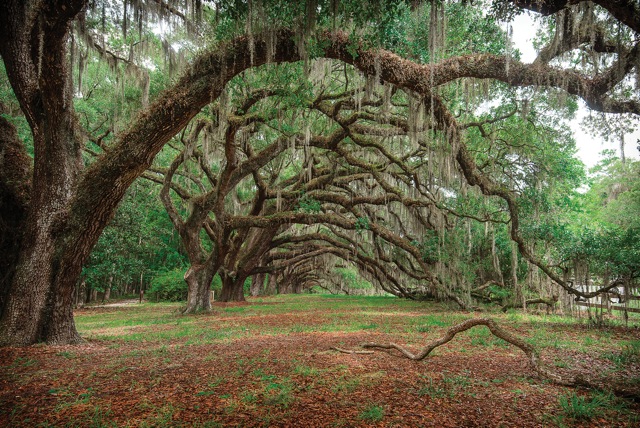 After the trees have been raised for a year or two, they will be planted in and around the neighborhoods where they were raised. Others will be given to the public or used to fill in large gaps on private property. (Photo provided)

It’s no secret that Savannah, Ga., is known for its tree tourism. In fact, approximately 14 million people descend on the low-lying, southern city each year to take in the area’s historic architecture and glorious tree canopy. However, what most visitors do not realize is that those trees are more than a mere aesthetic feature of the Old South. They are a vital part of the city’s infrastructure and something that should be valued and protected.

Unfortunately, as Savannah has grown, many of its trees have been sacrificed to development, reducing the city’s ability to capture and filter stormwater thus preventing flooding. But thanks to a grant from the Southeast Sustainable Communities Fund, Savannah’s office of sustainability has launched a multifaceted initiative that will help regrow its urban forest.

According to office of sustainability Director Nick Deffley, the Savannah Urban Tree Nursery Project was born out of a 2017 study the city conducted to address the depletion of its tree canopy and its ecological role in the community. The department looked at the issue from an economic and public health standpoint and concluded that if it could purchase 10 species of smaller native trees at a reduced cost from suppliers, it could raise them in vacant, city-owned properties for a few years before transferring them to the most beneficial areas.

“We were looking for some ways to do this when we learned about a call for grant proposals from the Southeast Sustainable Communities Fund, which wanted to support projects that implemented equitable solutions to local climate change challenges. We built out the project to cover their criteria and were awarded a $230,000 grant in January 2018,” he said.

Deffley noted that in addition to replenishing the city’s urban forest by utilizing existing vacant locations to grow and nurture 500 trees, the Savannah Urban Tree Nursery Grant Project is designed to engage youth and enhance the growing workforce needs of the community. Thanks to partnerships with a host of organizations, including Loop it Up Savannah, the UGA’s Center for Urban Architecture, WorkSource Coastal, UGA’s Marine Extension and Georgia Sea Grant as well as the Savannah Tree Foundation and the city itself, the office of sustainability has created a variety of opportunities for the community to take stock in the project and become involved.

“I could not be more pleased with our partners and what we have been able to accomplish so far,” he said. 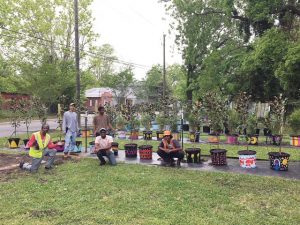 Interns in the project pose with brightly colored pots, which were painted by the community’s youth. By painting them, these children become invested in the project while also learning about trees’ importance in their city. (Photo provided) 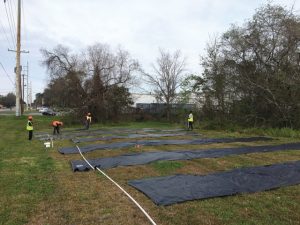 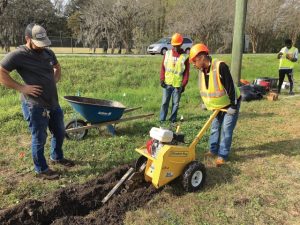 Central to the Savannah Urban Tree Nursery Grant Project is the workforce-training program the office of sustainability launched in partnership with the University of Georgia. The goal is to find and recruit individuals interested in a career as a certified professional landscaper and then give them the skills they need to pass their final exam. It is a paid internship that includes 32 hours of classroom training as well as on-site training that enables them to clear land, identify the various species, install drip irrigation systems and manage the trees as they grow.

“There are only a few people in the state with this distinction, and if someone is interested in working toward their certification, then we will help pay for that exam and help them toward their upward economic mobility,” Deffley said.

The project began with 19 apprentices ranging from 19-55 years of age and included both men and women from across the socioeconomic spectrum but has since diminished to six. Deffley said the attrition rate is not uncommon due to the nature of the program and the level of commitment expected from those who participate in it. 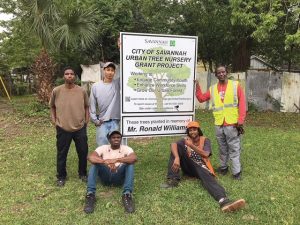 Participants in the Savannah Urban Tree Nursery Grant Project pose at one of the sites hosting the project. The project aims to engage community youth, enhance workforce skills and grow the city’s urban forest. (Photo provided)

“It’s a 13-month commitment and there are pressing needs that come up,” he said. “For some, a 12-hour work week at $13 is not enough and they seek employment elsewhere. We understand that. We are happy that they have found other positions and we are thrilled with the solid group that remains.”

The office of sustainability has also partnered with public schools near the temporary tree nurseries and engaged students to paint the pots the trees would be grown in. This not only adds a bit of whimsy to the project, but also allows young people to have ownership in the trees and be mindful of their importance in the coastal area.

“It livens up the aesthetics and gives them a sense of community pride,” Deffley said. “We took the opportunity to impart the value of green infrastructure, and after we raise the trees for one to two years, they will be planted in and around the neighborhoods where they were raised; some will be given to the public and some will fill in large gaps on private property.”

The Savannah Urban Tree Nursery Grant Project is an initiative that is getting a ringing endorsement from the city council and inspiring other beautification projects throughout the community. It is also inspiring other municipalities to reach out to Deffley to learn more about the project and mimic something similar in their own areas.

“We have been thrilled with the response, and as people have gotten wind of it, we have heard from people all across the country. I didn’t think it would strike that kind of chord with folks, but I guess it really resonates and that’s nice to see,” Deffley said.

NEXT: Improving communications and PR with the community you serve