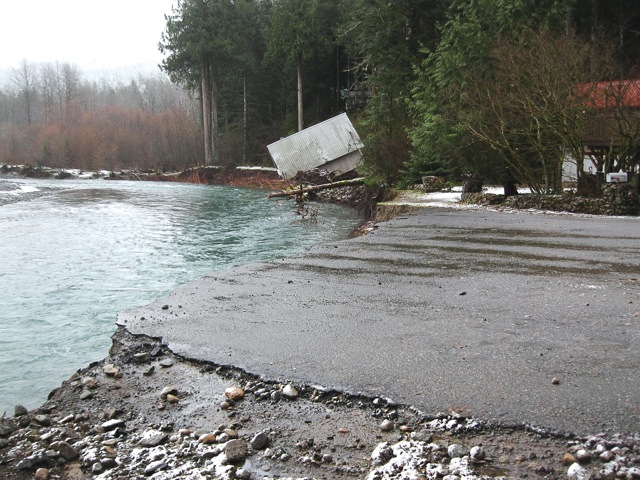 Erosion along the Cowlitz River began to wash away a road and threatened to do the same to multiple cabins located in Lewis County, Wash. This led the county to launch the Cowlitz River Erosion Project. (Photo provided)

In 2017, Lewis County in Washington faced a difficult task. A road along the Cowlitz River was experiencing extreme erosion thanks to the body of water’s wild and unpredictable nature. As the road began to wash away, multiple cabins in the county’s Timberline community were also in danger of losing their foundation and washing away.

County officials wanted to act fast, only initially they couldn’t. In order to stop the erosion, the county would need to do work on the river bank beneath the roads and the cabin. The problem was that in order to do that, permits were needed, which could take through 2019 to get — time that the county wasn’t sure it had.

Luckily, the county’s environmental planner, Ann Weckback, was able to get creative. 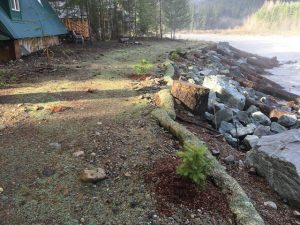 Upon the completion of the Cowlitz River Erosion Project, Timberline Community Association hosted a celebration to honor the workers who turned a dire situation around in such a short amount of time. (Photo provided)

“The Army Corps of Engineers had said that it would require a BA, a biological assessment,” said county manager Erik Martin, who was serving as the director of public works. “So initially we thought, ‘Okay, well, this is probably a year-and-a-half to two-year permitting process. As our environmental planner got to working on it, she saw was that there was remnants of an old embankment there and old revetment actually. And so she worked with the core to treat this as a maintenance of that existing a revetment.”

Thus, the county was able to avoid the need for a biological assessment and the permitting process. This expedited the project and got it done a year earlier than initially expected.

In the summer of 2018, the county got to work. Ordinarily, to protect an eroding embankment, the county had used chains or cables, but the Army Corps of Engineers thought that could, over time, be hazardous to the marine life. Instead, large boulders and pieces of timber were bolted together on the embankment.

“So we actually laid the logs at angles to one another, kind of stacking them up,” Martin said, “and then where those lugs cross each other, we actually bolted through the logs down into reinforcing boulders underneath, securing those logs to the bank that way.”

The county contracted Steel Trucking to do the work. Initially, it was thought that they would have to use a crane to put the logs on the embankment, but Steel Trucking actually modified a log loader and used that instead. The contractor also had a local timber source, which saved on transportation costs. Overall, Martin said the bid came in 40 percent under what was expected.

“It was initially actually concerning, cause when you get a bid that low, sometimes there’s maybe something that the contractors missed,” he said.

But after sitting down with the contractor, everything checked out.

To pay for the Cowlitz River Erosion Project, the county contacted FEMA, which contributed 75% of the funds for the project. 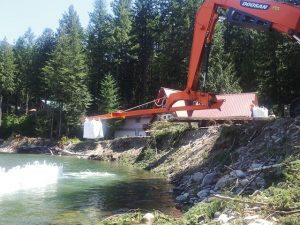 Work to combat erosion along the Cowlitz River started during the summer of 2018, first creating a barrier to the river’s current. (Photo provided) 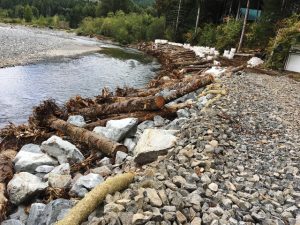 The award-winning Cowlitz River Erosion Project used stone and logs to protect the bank from erosion. The contractor used a local lumber source for the project, which saved the county money on transportation costs. (Photo provided)

“This was a preventative project,” Martin said. “FEMA will fund projects like that just to try to alleviate future costs, because if another large portion of our road were to wash out, then FEMA could have to come in and pay for a much more expensive project.”

Another 12.5% was contributed by the Washington Emergency Management Division, while the legislature capital budget chipped in $125,000. Given the savings the contractor helped provide and all the funding Lewis County received, it ended up playing less than six figures for a project that was initially estimated to cost more than a million dollars.

Once the project was complete, the Timberline community homeowners association hosted a ribbon-cutting ceremony with a stage and invited several local and state politicians. Its members thought it was important to celebrate how such a dire situation was able to get taken care of so quickly.

The Cowlitz River Erosion Project was also given an award from the Washington chapter of the American Public Works Association. It was named the project of the year in the Disaster or Emergency Construction/Repair category —  for work less than $5 million.

“To get recognized by (the APWA) was a really important piece for the county itself and the commissioners,” Martin said. “Obviously, we’re very proud. What I was most happy about is the recognition that the employees that actually put that project together and ended up helping construct it got, because this was a really out-of-the-box, innovative project and a lot of people really jumped on board, got behind it and worked really hard to get it done in the timeframe that we did.”