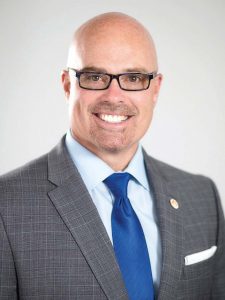 No matter if he is updating the residents of Broken Arrow, Okla., about the latest infrastructure improvements, economic developments or upcoming plans and projects, City Manager Michael Spurgeon ends his PSA videos the same way: “I hope to see you around town.”

It’s a message that comes straight from his heart not only because he grew up in the area, but also because he is genuinely interested in meeting those he works for.

And whenever a citizen takes the time to approach him on the street, Spurgeon is happy to stop for a chat and to listen to his or her concerns.

“It’s a small thing, but it’s the small things that make a difference,” he said.

Making a difference is at the core of Spurgeon’s career, and commitment to service is a part of his very being. After completing four years of active duty with the Army in the ’80s, Spurgeon continued to serve others through the National Guard and by working for two local governments in New Jersey.

“I was the land use coordinator for Pemberton and Eastampton Township where I helped process zoning board applications,” he said. “During that time, I learned how municipal government worked and had done well enough to serve as the interim city manager for the latter.”

That position led to his completing his education in public administration and becoming the city manager of Miami, Okla. — the hometown of his maternal grandfather. After nine years, Spurgeon felt that he had the qualifications necessary to apply for the position of city manager in Broken Arrow, a community just outside of Tulsa. It was his dream to return to his old stomping grounds. His father served on the Tulsa Fire Department. His grandmother worked for the Tulsa Police Department and his brother was the superintendent of schools. Spurgeon hoped he had enough experience to put him atop the list of qualified candidates, but he came up short and the city went with someone else.

“I ended up taking a position in St. Charles, Mo., as the director of administration in 2007,” he said.

As the mayor’s top aide, Spurgeon helped improve the city’s financial planning and a variety of economic development projects. He also helped foster good relationships with other local institutions. When the Broken Arrow city manager position became available again in 2015, he reapplied. This time, he got the gig.

Right from the start, Spurgeon was enthusiastic and energetic about his role.

He built a strong relationship with the mayor and the city council, attended plenty of meetings and made sure the community knew what he stood for. He firmly believes that the residents of Broken Arrow deserve the best quality of life the government can  provide and that they deserve transparent communication from their leaders.

Spurgeon is especially excited about the passing of a $250 million bond package that will help Broken Arrow rebuild its infrastructure. 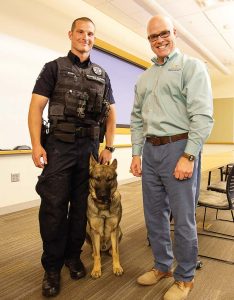 Meeting with city employees is another important aspect of Spurgeon’s career as city manager. He enjoys helping them reach their own career goals. Pictured, from left, are Officer Mike Ryan, K9 Thor and Spurgeon. (Photo provided) 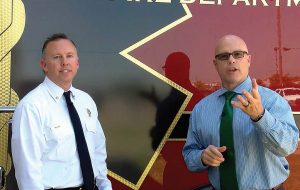 “Broken Arrow in Motion Take 5” is a YouTube series that allows Spurgeon and the city of Broken Arrow to connect with citizens and promote transparency. From left are Fire Chief Jeremy Moore and Spurgeon. (Photo provided) 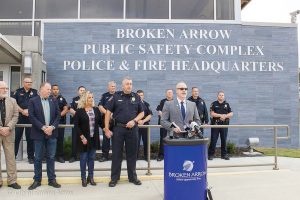 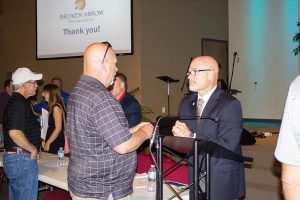 Actually getting out of his office to meet with Broken Arrow’s citizens is one of Spurgeon’s favorite aspects of his job. (Photo provided)

He sees infrastructure as the foundation of the community, and if it’s not invested in regularly and taken care of, it will crumble.

“I think of the countless ways in which I can help the citizens of the city,” he said. “I try to be all and do it all with empathy and kindness … and I owe a lot of that to the mentors I have had throughout my career.”

Spurgeon views his role as a “servant leader” and that he worked hard to foster a good relationship between the people of Broken Arrow and their government officials. He strives to give the various departments the tools they need to do their jobs effectively, and he tries to give the residents the resources they need to live their best life.

“I work hard on that,” he said. “The people of Broken Arrow are the nicest people you would ever want to meet, and it’s important to have a good relationship with them. We have developed a high level of trust with people, and if there is something we can’t do, then we will tell you why. Transparency is a hallmark of what we do here.”

One way to encourage transparency has been to give all 25 departments within the city a sense of what goes on within each one. For example, he said it’s important for the planning department to understand the challenges faced by the purchasing department and whether or not human resources has enough personnel to staff a new project or program. When they have a sense of how each department functions, it helps alleviate infighting, misunderstandings and helps to encourage cooperation.

Spurgeon also feels it is vital to recognize other servant leaders who work for the city, talk to them about their dreams and career goals and then help them earn the certifications and training they need to fulfill their potential. He said helping employees become successful in their chosen field is one way that the city of Broken Arrow will maintain some continuity even when changes in administration occur.

“I am 55 years old and I am blessed to be in good physical and mental health. I would like to be here for another 12-15 years, but I know one day the reins will pass to someone else. For now though, I want to know that I am making a difference. Broken Arrow is a great place to live and work, and there is no place I would rather be,” he said.