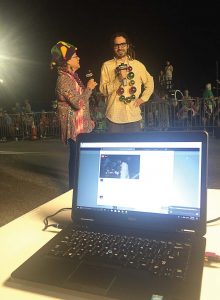 Dunedin, Fla., went live during its 2018 Mardi Gras festivities. The city of about 36,000 has found Facebook Live to be valuable when it comes to distributing information to the community. (Photo provided)

Community leaders are always on the lookout for ways in which they can take their social media platform to the next level. While they most likely have accounts on all of the major sites in addition to a central webpage, many municipalities are making the leap and going live. Experts say that live broadcasts are a great way to connect with your community and get critical information to masses — especially when there may be no other way to do so.

In times of trouble

Courtney King, community relations manager for the city of Dunedin, Fla., said the Pinellas County community of 36,000 was an early adopter of social media and has maintained a Facebook page since 2010. While some eschewed the idea of constantly updating an account, she knew social media was the wave of the future rather than a passing fad, and she has made a point of staying up to date on the latest features and applications.

In addition to its Facebook page, Dunedin added a Twitter feed and a YouTube channel to its platform — all of which help it bring news, updates and developments to the public; however, when Hurricane Irma hit the state last October, Facebook Live became a critical communication tool.

“We used Facebook Live for smaller things in the past, like parades, but when the hurricane hit, it was the way in which we got urgent information out to the community,” she said. “We would broadcast messages from the mayor, fire chief and other departments at the emergency operations center to people who may be without power, but still had access to the internet through their cellphones.”

It was an effective strategy, and when the storm subsided, the public thanked the city for keeping them in the loop with its live updates, and since then, Dunedin has looked for opportunities to go live more often.

“Luckily, the city manager is very supportive of technology, innovation and, of course, citizen engagement. That’s what really helped our live efforts take off,” King said. 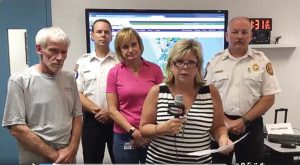 During Hurricane Irma, Dunedin broadcasted messages from the mayor, fire chief and other departments at the emergency operations center. While many people were without power, the messages could still be accessed by people who had internet through their smartphones. (Photo provided) 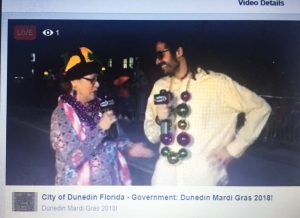 By going “live,” cities can engage residents in a new way while getting news, updates and developments out. (Photo provided)

According to Smarsh, a leading provider of archiving and compliance
solutions for companies in regulated and litigious industries,
adding live stream content to a community’s social media platform
can optimize the communications plan for a variety of departments.

While it isn’t too hard to get started, creating a trusted resource for municipal information does take a certain amount of strategizing and planning in order to launch it properly.

King said her initial Live sessions involved nothing more than a cellphone, which naturally resulted in poor-quality audio and a lot of shaky footage. Later, she incorporated a plug-in microphone from Dunedin’s television studio, which improved the quality of the audio, and most recently, the city has invested in a Padcaster, which mounts an iPad onto a tripod and increases video stability.

“There are a lot of things that you can hook up to an iPad or iPhone, such as wide angle lenses and microphones, that can help you create a professional mobile setup and improve the quality of your live broadcasts and create engaging videos,” she said. “It’s really amazing what all you can do.”

Smarsh said when you make the leap into live content, it is important to let your audience know when you will be broadcasting so that they can tune in. Also, you’ll want to train your representative or spokesperson to use consistent messaging during all Live sessions so that you can reinforce the individual as a knowledgeable and trustworthy source of information. Additionally, use everyday language as opposed to formal terminology. Repeat important information several times during a broadcast such as phone numbers, websites, names and dates as well as locations, and do not forget to update all social media accounts with pertinent facts so that the public can refer back to them if necessary. Above all, encourage your audience to share the session with others so that you can spread your message to as many people as possible.

It is also important to stay up to date on any of the new social media applications in addition to any tips and trends that other communities are using to get the word out. The Government Social Media Organization is the first national network for U.S. local, state and regional government social media managers. The goal of the GSMO is to facilitate an environment where government entities can network, collaborate and share best practices for using social media.

Members offer tips and tricks for getting the best video content and what programs can be used to spice up footage without breaking the budget. Another topic explored by GSMO members is ways to increase your viewership, “likes” and “followers.” The organization also spreads awareness of how communities not using video could be left behind.

“There is a lot to learn where social media is concerned, but the good news is that anyone can learn it and any community can implement it,” King said. “It helps to have the support from your leadership, but by adopting these new communication tools and techniques, you will be better prepared when an emergency arises and will be able to get your message to the public as quickly as possible. The future is now and social media is where it’s at.”

Is your community social savvy?

Want to stay on the cusp of what’s hot in social media trends for 2018? Here are some things your community can do to stay up to date in the social sphere.
• Facebook: From its Live feature to its upcoming launch of a Sound Collection of free audio tracks, this platform will help you incorporate engaging video messages in all that you do.
• Twitter: While brevity is still beautiful, Twitter has increased its character limit from 140 to 280 giving you more room to get your message — and video content — across.
• Instagram: If you want to go to “hashtag heaven,” Instagram is the way to go. Trending topics are timely for those who use this social platform, especially those who use it to help brand their agencies.