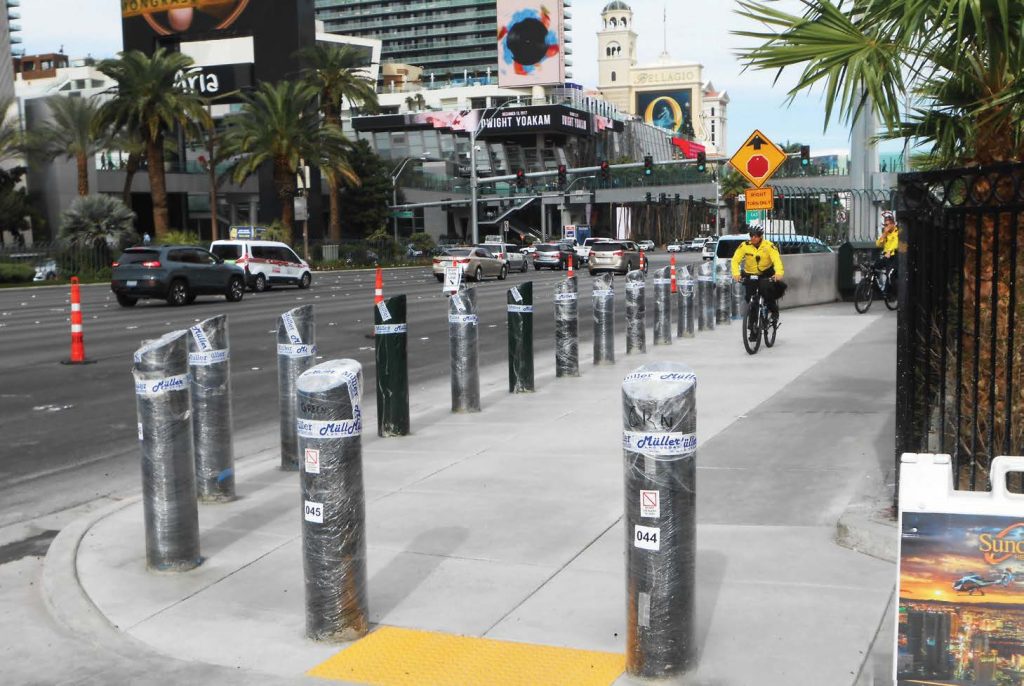 A Las Vegas officer patrols the strip. The Las Vegas Police Department has been praised for its quick response to an Oct. 1 mass shooting that occurred in the city. Las Vegas and Clark County are also being proactive in protecting pedestrians from weaponize motor vehicle attacks by installing barriers. (Photo provided)

2017 was a year full of turmoil in the United States as several cities experienced mass shootings and other violent attacks. These tragedies occurred all over the country — from New York to Las Vegas.

The year’s deadliest event occurred in Las Vegas on Oct. 1 when a gunman opened fire from his hotel room into a crowd of concertgoers, killing 58 people and injuring over 500 others. It was one of the most devastating civilian attacks in America’s history.

As the nation mourns, law enforcement agencies and departments throughout the country have been working to adjust to the heightened sense of danger many citizens feel.

“Anytime there is an event we all look at ways of prevention and preparation,” said Chief Blaine Clark, the chief of police for Dubois, Pa. “As you know, nothing is normal anymore, and we as a nation are seeing a new style or unfamiliar tragedies every day.”

Of course, it’s about more than making sure people feel safe. In order to thwart potential attacks, it’s important that police officers are always on high alert and doing their best to be cognizant of suspicious activities.

“We have put in cameras in our public parks, increased our patrols and, as a whole, have become more proactive,” Chief Clark said. Following a driver driving onto the sidewalk on the Las Vegas Strip, Clark County, Nev., installed physical barriers to prevent any vehicles from accessing sidewalks on the strip. (Photo provided)

It’s also necessary for law enforcement to interact with the members of its community.

“It is our intent to educate the public to be more aware of their surroundings, to say something if they see something and never take anything for granted.”

Officers can engage with their community while they are on patrol or by hosting forums in their local newspaper, which is what the Berrien Springs Oronoko Township Police Department does. The township, located in southwest Michigan, also has a community resource officer, who is assigned to each local school.

These things are important because if the community doesn’t feel comfortable enough speaking to police officers, then it’s difficult for law enforcement to function effectively.

“We are as proactive as we can be, but we usually only have one or two cars on per shift in a community of over 10,000 people,” Berrien Springs Oronoko Township Chief of Police Paul Toliver said. “It’s impossible to see everything all of the time, so we really depend on the public. We’d rather have a false alarm that we respond to than not know about a situation that turns out to be a tragedy. If there’s suspicious activity, we want to know about it.”

It’s also helpful for law enforcement departments to be in contact with each other, especially when it comes to hosting major events. That’s what the police department in Tinley Park, Ill., does.

According to the city’s chief of police, Steve Neubauer, his department always reaches out to sites that previously hosted events that are coming to Tinley Park’s Hollywood Casino Amphitheatre, which has a capacity of over 28,000 people. The department wants to know if any unexpected issues arise that they need to be aware of so they can prepare accordingly.

However, there is only so much prevention that a police department can do.

“All agencies and municipalities have to recognize (something),” National Association of Police Organizations Executive Director Bill Johnson said. “As important as it is to try and do everything that we can to prevent an attack, we also have to try and prepare for the very real possibility that if someone is determined enough, they can still attack and hurt us.”

Johnson applauds the efforts exhibited by several police departments in the wake of tragic events that took place in 2017 — particularly Las Vegas’ department, which responded immediately to the gunman’s attack in October.

“I think it shows the kind of proactive desire to learn and thus to be better prepared. I think Las Vegas did a very good job in the midst of unthinkable carnage,” Johnson said. “As horrific as it was, it would have been much, much worse if the officers had not gotten there as quickly as they did.” 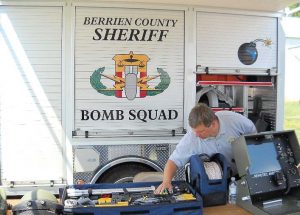 A member of the Berrien County Sheriff’s Office’s bomb squad shows off equipment ready for use if needed. (Photo provided) 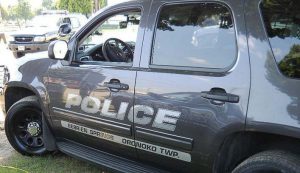 Berrien Springs Oronoko Township Police Department in Michigan has been focusing on building relationships between officers and the community so citizens feel comfortable speaking with police if they see anything amiss. (Photo provided)

The recent shooting isn’t the only civilian attack Las Vegas has experienced in the past few years. The city has also been affected by attackers who weaponize motor vehicles by driving them into pedestrians on the sidewalk — similar to what happened outside of a New York City hookah bar in December of 2017.

The most egregious example of this in Las Vegas is from Dec. 20, 2015, when Lakeisha Holloway killed a woman and injured 34 others after she drove onto the sidewalk on the Las Vegas Strip. At the time of press, Holloway is awaiting trial.

In order to combat this type of attack, Clark County is putting up physical barriers that would prevent any vehicles from being able to access the sidewalks on the strip.

“It will serve as a dual purpose: Prohibiting a vehicle from accidentally leaving the roadway and hitting pedestrians and also preventing someone who may intentionally want to ride up on the sidewalk,” said officer Larry Hadfield, who works in the Office of Public Information at the Las Vegas Police Department.

The best thing that America can hope for is that the string of tragic events seen in 2017 doesn’t continue. They are causing United States citizens to fear their neighbors and anyone who is near them. Yet, it’s important for police officers to remain prepared for the unexpected and continue to learn from the tragedies. Perhaps then 2018 will feel a little safer.