Columbus, Ga., is the county seat of Muscogee County, and its public works department is making a name for itself and for good reason. 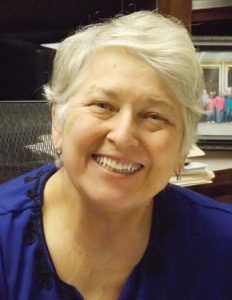 The employees of Columbus are into enthusiastic cross-training and doing so with their employer’s blessing — during work hours, no less.

This type of cross-training is just as much mental as physical. Pat Biegler, director of public works, goes into more detail about her successful endeavor that initially didn’t arouse much enthusiasm.

“Cross-training is a program that our forestry and beautification division put in place, in which crews are moved around to learn each other’s jobs,” explained Biegler, adding that two of her supervisors were on the agenda at the 2017 National American Public Works Association Conference in Orlando, Fla.

One of her supervisors, Michael Jordan, assistant beautification manager, said that the at-first-reluctant employees are adjusting very well.

“Like any form of change in the workplace, they had a brief period when they doubted if this was the best way to conduct business,” said Jordan. “They have since grown accustomed to the changes and look forward to learning about different areas of the division. This also created a greater sense of camaraderie among the crews. There was also a new-found respect for what the other crews had to do during the course of the work day. I guess the old saying of walking a mile in someone else’s shoes is still true.” 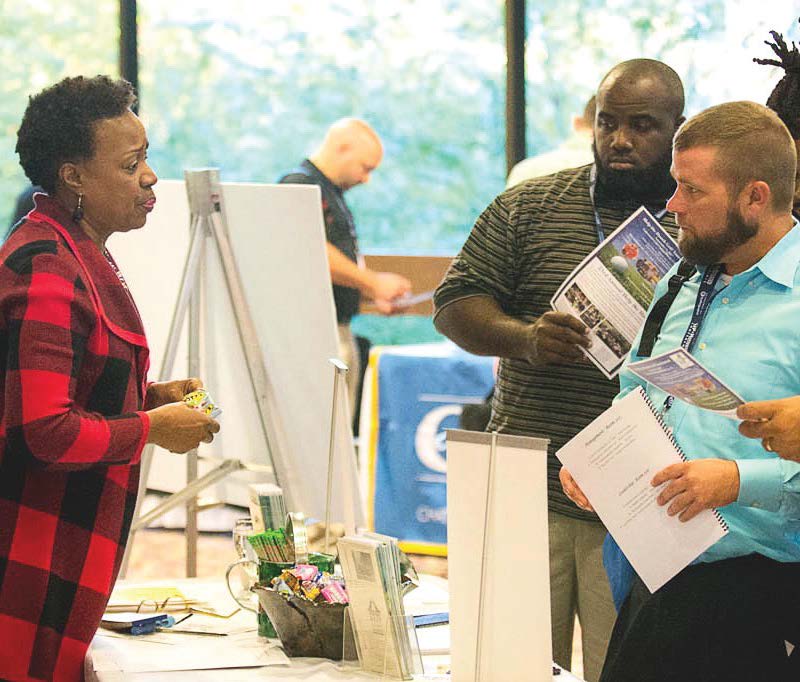 The public works department holds an annual training conference, titled “Up and Motivated,” for leadership, management and self-improvement for operational staff.

According to Biegler, the department is in its fifth year with the conference having taken place Oct. 17, 2017.

“It started out just for the public works department but has now been extended to the whole city,” said Biegler.

“Up until this year, we have put it together with the only cost being the catering of breakfast and lunch. We’ve now outgrown our ‘free’ venue, and this year we have to pay for use of space at the Columbus Trade Center. The theme changes every year — (along with) the speakers — with a slightly different focus. We’ll have roughly 140 employees trained. This program won the Exemplary Diversity event in July 2016 in the Georgia Chapter of the APWA.”

Additionally, Columbus has established a two-year leadership development program using in-house resources, replacing a contracted program. The sessions are taught by deputy city managers, department heads and other senior personnel and focuses on how things are done in Columbus.

“One of the great things about Columbus is that I have gotten tremendous support for my ideas rather than resistance both from management and from my staff,” said Biegler, who teaches three of the leadership development classes.

“My staff has bought into my vision and really helped to pull the programs together. Probably the most difficult part was taking my half-baked ideas and working with my staff to turn them into something more concrete. Once we got through the first one, the others came more easily.”

In the Workplace Athlete competition, employees complete a variety of physical challenges that are related to job safety. (Photo provided) 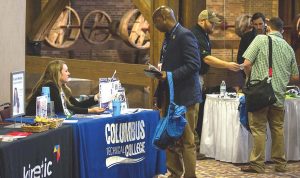 A public works employee checks out some college opportunities at an Up and Motivated conference. (Photo provided) 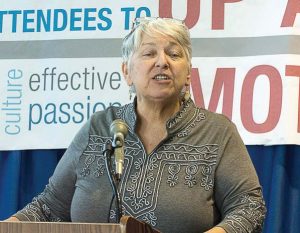 Pat Biegler, director of public works, teaches a class at an Up and Motivated conference. (Photo provided)

Each April the department has a program called “Workplace Athlete,” which is an obstacle course based on safety and proper form rather than on speed and strength. Initially, it was just for the public works department but has now been expanded to include the parks and recreation department. This program also won the Georgia APWA award for the Exceptional Diversity program in 2017.

Workplace Athlete takes place in an open field adjacent to the public works building. Some of the challenges include:

One of the suggested events the first year was a tire pull. While it wasn’t directly related to a job activity, a good competitive spirit adds to the excitement, according to Biegler.

“I told them I thought it was a great idea and to get the biggest, heaviest tire they could find, and they sure did,” said Biegler.

“The first year we had teams of five trying to pull that tire, and only two teams were able to budge it, and the best team moved it about two inches. They used every technique they could think of without success. Everyone tried multiple times. The second year we allowed teams of six, and they were able to move it a few feet. Every big guy we have got recruited for that effort. It was great fun with everyone cheering them on.”

She added, “We now have a rotating trophy for the winning team.”