Ground-penetrating radar is a method that has potential for municipal use, especially when it comes to public works projects. Two projects, in Michigan and Florida respectively, illustrate its capabilities and limitations.

According to the Environmental Protection Agency, “ground-penetrating radar (GPR) uses a high-frequency EM (electromagnetic) pulse transmitted from a radar antenna to probe the earth. The transmitted radar pulses are reflected from various interfaces within the ground, and this return is detected by the radar receiver. Reflecting interfaces may be soil horizons, the groundwater surface, soil/rock interfaces, manmade objects, or any other interface possessing a contrast in dielectric properties. The dielectric properties of materials correlate with many of the mechanical and geologic parameters of materials.”

In general, GPR works best in dry sandy soils with little salt content, according to an article from Brownfield News. In some situations, penetration depth may be limited to a few feet or less within clays, whereas sand could allow up to 30 feet or more. Another advantage is cost. A GPR survey can be done at a cost of $1,000-2,000 per day, according to that same article. Due to these advantages, GPR is now often the preferred method on environmental and construction sites. “Instead of boring three to four holes, companies can bore one hole and then use GPR to match the results and correlate data across the remainder of the site,” the article states.

Another pro is that the applications of GPR are broad, but the data and its interpretation can be used for a specific purpose. Blissfield, Mich., is one example. In September, the village council approved a plan to purchase a parcel of land to use as a site for a new swimming pool. The new pool will replace one from the 1950s, which had been closed for the past two years. The structure experienced damage from flooding. That’s why before moving forward with the purchase and project, the village did its due diligence.

“This piece of property was a sugar beet processing plant, so there was some suspected cement in the area,” said Mark Strahan, Blissfield Department of Public Work supervisor. 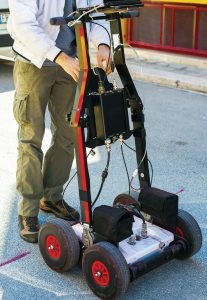 GPR offers many benefits for public works projects from mapping utility pipes or graves to checking a site for potential building hazards. (Shutterstock.com) 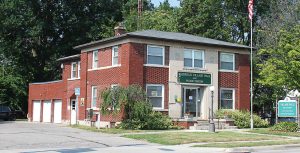 Blissfield, Mich.’s, village council approved the use of ground-penetrating radar to determine the condition of a lot, which formerly housed a sugar beet processing plant, prior to its purchase for a new pool. (Dwight Burdette via English Wikimedia.org) 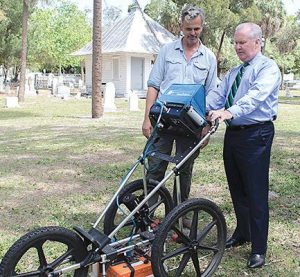 From left, Thomas Pluckhahn, associate professor and archaeologist at the University of South Florida, and Tampa Mayor Bob Buckhorn test out a ground-penetrating radar unit in Oaklawn Cemetery. (Photo provided) 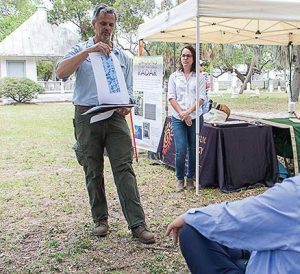 The city of Tampa, Fla., used GPR to determine where unmarked graves might be located in Oaklawn Cemetery. The city hopes to use this data to bolster the cemetery’s claim to become a national historic landmark. (Photo provided)

Dave Koppelman of Architect Forum Midwest in Oregon, Ohio, was charged with exploring the site. He, along with public works employees, uncovered evidence of the factory that used to occupy the site. Upon uncovering this knowledge, Koppelman recommended the village hire a ground radar unit to further examine the site.

According to Strahan, the site had several “anomalies,” which they will take into account as they move forward. Plans call for the construction of a new pool for summer 2018, he said.

Officials in Tampa, Fla., were equally concerned with what lies beneath the surface — of a local cemetery. The 167-year-old Oaklawn Cemetery is known to be the final resting place for at least 1,000 early Tampa residents, but they wanted to know the full extent. In March, a team of anthropologists and students from the University of South Florida went on site to search for and map unmarked graves.

“Tampa has a lot of rich history, but it’s buried beneath the streets,” said Thomas Pluckhahn, PhD, associate professor and archaeologist for USF’s Department of Anthropology, in a statement released by USF.

The map generated by the USF team will boost the city’s cause when they nominate the cemetery as a national historic landmark. This would make it eligible for federal grants to repair damage caused by age, weather and vandalism, according to the statement.

The team mapped the existing 1,500 marked graves and used readings from the ground-penetrating radar and magnetic field detector to identify potential unmarked graves.

Jeffrey Moates is director of the West Central & Central Regional Centers at the Florida Public Archaeology Network. Moates was among the crew who conducted the geophysical survey at Oaklawn Cemetery in Tampa, and recovered and analyzed data. His team reported results of the survey to City of Tampa Parks and Recreation Department.

Moates said no two surveys are the same and that rule applies to cemeteries, especially.

“Every cemetery is different and requires different approaches to preservation management. Historic cemeteries may require specific attention, especially when infrastructure or utility projects are to be undertaken. All areas, including established access ways, should be included in below-ground assessments.”