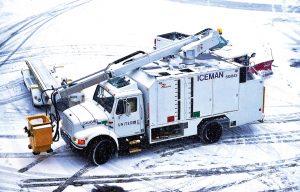 Airport tarmacs — like this one at John F. Kennedy International Airport — are one potential use for conductive concrete, one of the reasons the Federal Aviation Administration is funding research into its use. While currently costly to install, conductive concrete shows potential for saving money in the long run with its durability and reduction in maintenance costs associated with snow and ice. (Shutterstock.com) 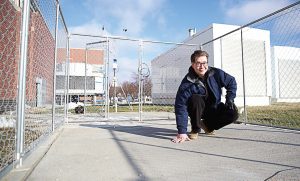 Christopher Y. Tuan kneels beside his conductive concrete that makes pavements safer to navigate. Tuan was the inventor of the exciting technology that quickly melts snow on roads, sidewalks, driveways and airport tarmacs. (Photo provided)

It seems like a dream come true, especially for the U.S.’s northern regions that get blasted with snow, making roads and sidewalks dangerous to navigate. What we’re referring to is real: There is a way to keep roads, driveways, sidewalks and tarmacs safe and clear of the white stuff that kids find so enjoyable.

But — you knew there was a caveat coming, didn’t you? — like all dreams, there are real obstacles before we can even partially live out the winter fantasy of no more shovels, snowplows, cans of deicer, kitty litter or road salt.

The technology of conductive concrete has been around for at least a couple of decades, but the biggest hurdle is cost. There is hope, however. According to an article posted in January 2016 in The International Society for Concrete Pavements, the Federal Aviation Administration is funding research to make conductive concrete more affordable.

Christopher Y. Tuan, PhD, P.E., S.E., F.ASCE, professor of civil engineering at the University of Nebraska-Lincoln, has been successful in producing a recipe for the special concrete. He adds 20 percent worth of steel shavings and carbon particles into the standard concrete mixture, in combination with the right amount of electricity to thaw out snow and ice during storm season. Despite the electricity used, his conductive concrete remains safe to touch. The end result is a more successful choice than regular concrete combinations that are currently used on sidewalks, driveways, roads and airport runways/tarmacs.

In 2003, Tuan became the first in the world to implement conductive concrete for deicing when he installed a heated deck system for the 150-foot Roca Spur Highway Bridge in Lincoln, Neb. According to the 2008 report “Implementation of Conductive Concrete for Deicing (Roca Bridge),” the new formula being tested at the University of Nebraska-Lincoln “uses byproducts from the coal and steel industries to reduce costs 60% compared to earlier trials … Conductive concrete also has the potential to become a very cost-effective bridge deck deicing method … (and) the technology provides an environment-friendly solution to address the looming crisis of water supply contamination by road salts, particularly on bridge decks over streams and rivers in the cold regions.”

During the testing process, Tuan begins by mixing the steel fibers and carbon powder, which are conductive, into the concrete. This mixture is poured into test slabs and then embedded with electrodes that, when plugged in, send electricity through each slab, generating heat. Once the conductive concrete is poured into the forms for the test slabs, a thermocouple wire is stuck to the center of the test slabs to measure their temperature. A variety of differently mixed slabs are then kept in a freezer at 25 degrees, and the test slabs are hooked up to 110 volts of AC power. The controls start the power when the temperature drops to 35 degrees, and if the temperature rises to 55 degrees, the power shuts off automatically.

“It can also be turned on remotely to catch big snowstorms,” Tuan said of the Roca Spur Bridge, adding that the power used to generate the bridge “could run 23 hair dryers at the same time.

“It’s not cheap to build these roads, but once they’re in place, they require little maintenance, and lab tests show they are almost twice as strong as regular concrete.”

Tuan, who appeared on the CBS show, “The Henry Ford’s Innovation Nation,” last January, said that traditional deicing and salt use on the roads can gradually erode the pavement and create unsightly potholes. Additionally, there is the cost of plowing. All of these downsides of regular concrete could be addressed by using conductive concrete.

“The cost of deicing the bridge during a three-day blizzard usually costs only $250 with conductive concrete, which is vastly less than the cost of plowing and chemicals, and it doesn’t wear down the road,” Tuan said. “However, right now conductive concrete costs about $350 per cubic yard as opposed to regular concrete. Of course, regular concrete does not have the deicing function.” 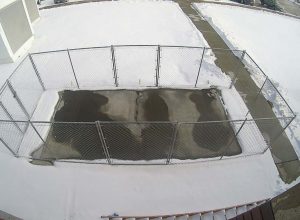 This photo is actually from a four-hour time-lapse video showing conductive concrete melting fresh snow from its surface during a winter storm in Omaha in December 2015. (Photo provided)

He noted, “Current codes and specifications do not have applicable provisions to conductive concrete, which impose constraints to its use. Because conductive concrete technologies are relatively new, technical information and test data about its applications need to be made available to architects and engineers who would specify it for their deicing needs in the projects.”

Tuan has done a driveway entrance in Omaha and also a handicap-accessible walking ramp last year at the College of Business building at the University of Nebraska-Lincoln. He is currently pursuing projects with several municipalities and airports. Additionally, work is underway more responsive sensors and controls that can turn on automated concrete slabs when blizzards approach and shut them off when no longer needed.

Another research-and-development possibility of keeping the roadways clear is very much in its infancy and involves the use of paraffin oil — phase change materials or PCMs — in concrete to store energy, which is later released as heat. Research on this potential solution is being led by Yaghoob Farnam, PhD, assistant professor of Drexel University College of Engineering in Philadelphia.

“Please be advised that cc is not for DIY projects like the Quikrete you buy from Home Depot. The end user would need to hire an electrician to supply power to the concrete. Some engineering is required,” Tuan concluded.

Tuan invites readers to contact him for more information at ctuan1@unl.edu.

Below are some fascinating videos showing Christopher Y. Tuan’s method and conductive concrete at work melting snow and ice: