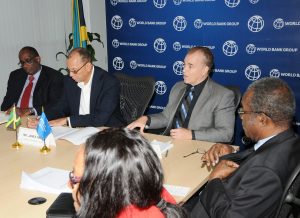 The World Bank Group, as part of its Disaster Vulnerability Reduction Project, and the Global Facility for Disaster Reduction & Recovery (GFDRR) facilitated this agreement through a $30 million loan granted to the Government of Jamaica to support investment in resilient infrastructure and disaster risk reduction measures. Between 2001 and 2010, ten major natural disasters impacted Jamaica, affecting approximately two million people and causing nearly $1.21 billion in property losses. This agreement is a much-needed boost to Jamaica’s efforts to address the effects of natural disasters and prevent the loss of lives and property.

The Code Council’s engagement in Jamaica complements a simultaneous effort carried out by the Government of Jamaica to enact a new Building Act, expected to be passed by Parliament by December 2017. The act would considerably modernize building control processes and formally give legal effect to the adapted ICC building codes. BSJ Chairman James Rawles noted that “ICC engagement is critical to Jamaica as it will set the stage for a successful implementation of the new Jamaican Building Code. This will be a major step to protect health, safety and welfare and make Jamaica more resilient to natural disasters.”

“This is a landmark agreement with the potential to protect health, safety and welfare in Jamaica,” said ICC Executive Vice President Mark Johnson. “We are excited to be working with Jamaica and many other countries around the world to establish strong building codes, resilient communities and safe buildings.”