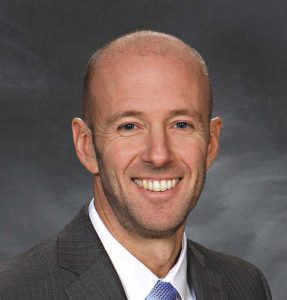 Gano, who moved to Des Moines two years ago to take his current job, had been working in the public works field for a decade in Missouri and explained his personal adaption of the popular show.

“Early in my public works career, I borrowed a learning technique from the Army,” began Gano, a civil engineering graduate of the United States Military Academy in West Point, N.Y., who later earned a master’s degree in engineering management from the University of Missouri at Rolla.

Called a Right-Seat-Ride, it is a training and observation opportunity for a peer-topeer exchange by shadowing someone, quite literally riding in the right side of their truck while they go about their duties.

“I started doing the same thing with my public works crews, riding in the right-side seat and following along for the day. We’ve all seen this before, the boss jumps into a crew, poses for a photo op, grips and grins, and goes back to the office, never to be seen again. The boss feels like they’ve done their duty to join in with the field crew and get their hands dirty.”

Gano continued, “What I do differently is that I go back again and again and again. Every two to three weeks, I join a different work group for a day’s work in the field. It takes me almost an entire year to get through each work group in the department. Kind of like ‘Undercover Boss,’ just not undercover.”

Gano insisted that he be treated just “like an extra, if unskilled, pair of hands,” rather than “a dog and pony show.”

He would just rather join the day’s work, said Gano, adding that doing so had presented him with a tremendous variety of experiences.

Jonathan Gano, second from right, is pictured at a panel discussion on water quality in the landscape upstream from Des Moines, Iowa. He is joined by with farmers who are active conservation partners and a Des Moines City Council member. (Photo provided)

“My advice to public works leaders across the country: Take off the suit and tie, put on your safety vest, grab your gloves and go to work with your people. I lead a workgroup of almost 400 men and women resourced with $120 million per year in a city of over 200,000; there’s plenty of demands on my time, and I could spend it going from meeting to meeting like many busy public works professionals, solving problems and making policies, etc., feeling like I couldn’t afford this much time out and about — but you make time for what’s important. Your staff will get to know you as a person and vice versa. You will get to see and do things that you’d never encounter otherwise.”

Gano — who is married with four kids and enjoys reading, running and playing the guitar — traced his career from commencement.

“After graduating from the military academy, I was commissioned into the U.S. Army as an engineer officer,” said Gano. “I spent eight years on active duty with assignments in Europe and the U.S. I served as a platoon leader and maintenance officer in a combat engineer battalion. Later I commanded an engineering company and a recruiting company.

“In 2004, I started work in the public works department of the city of Springfield as the operations manager of the streets division. After a few years, I advanced to be the superintendent of streets and a few years after that to the position of assistant director of public works. I served in that capacity for four years before starting here in Des Moines.”

Asked how he happened to “fall” into public works, Gano said a good friend of his was working in the public works department in Springfield where he was living while job searching at the twilight of his military career.

“Their operations manager had just retired and he recommended the position to me,” said Gano. “As a military officer, I was a good fit for the job because of both a technical engineering background and I brought experience with leading large work groups.”

“Phil hired me into my first position in public works and maintained a weekly leadership role with me for the next nine years until his untimely passing,” said Gano. “Of the many important lessons that I learned from him, I’ll never forget that he always made an extra effort to make each coworker feel valued not just for their work, but also for who they were as a person — everybody is important. Rarely was he found without a smile and a kind word for anybody he encountered.”

Gano is an active member of the American Public Works Association who has also served as a leader in the Missouri chapter of the APWA, culminating with a term as the chapter president and earning recognition from the national association as the 2010 Young Leader of the Year. Additionally, he is a member of the Water Environment Federation and the Solid Waste Association of North America and the American Water Works Association’s committee to develop standards for storm water utilities. These involvements have also helped guide his public works career.

“I have also had the fortune to have been mentored by another consummate public works professional, Larry Stevens, P.E. We’d been introduced while he was serving the APWA as a regional director and I was in the Missouri chapter as a director. His advice and mentorship through the APWA Public Works Executive Certificate Program has been invaluable.”

Gano and his crew are currently undertaking some interesting projects, most notably a $111 million flood mitigation project.

“Des Moines is a river town. Sitting at the confluence of the Des Moines River and the Raccoon River, there is almost 10,000 square miles of the most productive and heavily cultivated farmland in the world upstream from Des Moines. The city is protected by 21 miles of levees and has experienced major flooding three times in the last 25 years. The most famous, or infamous, flood in 1993 left the 500,000 people without drinking water for two weeks. Subsequent floods have overtopped levees and the city has sustained major damage in recent memory from flooding.

“We are working on a $111 million flood mitigation project to raise the height of our levees, lift bridges out of the floodway, flood harden the wastewater treatment plant and improve floodwall closures throughout the downtown.” He added, “But this will be the last time we raise the levees and bridges. The next generation of flood control will be out in the landscape. This is the next big future project I’m working on now.”

In addition to that project, Gano said, “Work is underway now at the University of Iowa’s Flood Center to develop and implement the Iowa Watershed Approach, a way to engage stakeholders throughout the landscape to implement conservation practices that both reduce the quantity of water and improve the quality of the water coming off the land.”

Engagement is also a key component to the overall project, with Gano saying, “The city of Des Moines is engaging the larger community across the state of Iowa, joining with other cities, counties, conservation districts and agricultural sector partners with a One Water approach. We are a part of the largest conservation project of national significance awarded grant funding from the USDA in 2016, working with an innovative public-private partnership that leverages a significant investment from the private sector.” He added, “We will be working well outside our jurisdictional boundaries to help property owners and farmers with their land.”

He concluded, “This is a generational project. We got into this situation over several decades, and it will probably take several more to get out, but we have to start somewhere and sometime. I’d rather start now than kick the can down the road.”

Finally, Gano remembered a saying from his YMCA camp days that continues to guide his life: “Dream big dreams, and then put on your overalls.”