To bee or not to bee?

With apologies to The Bard of Avon, more and more municipalities are saying yes to bee … raising bees. 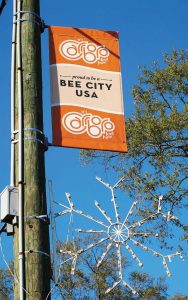 “We are very proud of that commitment,” said Marty Hanks, a local bee farmer/activist at the Carrboro Farmers Market.

“It shows that our community gets the ‘big picture’ of our interaction with and effects on our ecology. My work with honeybees is meant to start conversations about all pollinators,” said Hanks. “The U.S. currently has over 5,000 known bee species so this dedication is taking that conversation to a larger platform. We need to all understand our roles in urban development and how they affect our ecology. Concrete strip malls and forests cleared for expansive human parks mean we just eradicated homes and forage for beneficial insects. Ironically, the very insects that provide us with over 90 percent of the food we eat.”

Bee City USA is a nonprofit program based in Asheville, N.C., that educates cities on pollinator conservation in an effort to stop global declines from habitat loss, poor nutrition and pesticides by raising awareness, enhancing habitats and celebrating achievements.

“A single tree can hold a year’s worth of food for pollinators,” said Hanks. “Cutting without thought and planning can have long-term negative consequences. Many of our pollinators are trying to tell us they are struggling and dying. We just need to be able to see and ‘hear’ it. Bee City USA is a vital tool and educational trigger to have that important conversation.”

For many cities, purchasing choices are affected to some extent, namely selecting chemicals that are pollinator friendly. Randy Dodd, Carrboro environmental planner, noted that in Carrboro the impact was relatively minor when it came to purchasing decisions, from products to services.

“Enrollment in Bee City USA has had a minor impact on purchasing. Since enrolling, the principal new decisions that probably wouldn’t have been made if we hadn’t enrolled are buying the rights to screen two movies and contracting with a mural artist. The mural artist is being paid through the Tourism Development Authority and the hotel use occupancy tax,” said Dodd, adding that otherwise there were no real fiscal impacts.

“The public has been receptive, with a few examples being the turnout and interest at the first Pollinator Day, the local high school adopting bee hives in cooperation with a beekeeper, and the buzz surrounding the honeybee fresco on Fire Station No.1. We hired artist Matthew Willey, who started a global initiative, For the Good of the Hive, to paint the mural.”

The two national/international movies Carrboro has been involved with are “More than Honey” and “Queen of the Sun.” And the most successful result of the city’s Bee City USA title, according to Dodd, was its, “heightened awareness of the role of pollinators both ecologically and for the support they provide humans.”

According to John Rintoul, president of Orange County Beekeepers Association and local beekeeper, the OCBA has maintained demonstration hives in Carrboro for several years.

“Historically, our members have used these hives as a community teaching tool,” said Rintoul. “We educate students of all ages, Scout groups, garden clubs and other community groups with an interest in pollinators, beekeeping and the environment.”

Rintoul added, “Our original apiary site was problematic, lacking sufficient parking for large groups and often muddy and inaccessible. It had very limited public visibility. For those reasons we contacted Carrboro High School in January 2016 with a proposal to relocate our demonstration hives to the CHS campus. We received an overwhelmingly positive response. The CHS faculty, the principal and the Chapel Hill-Carrboro City Schools District office staff could not have been more supportive.”

The OCBA selected the CHS location based on the enthusiasm of the faculty and staff, according to Rintoul. “But equally important to OCBA’s community education mission was the location of the hives in terms of parking, accessibility and visibility.” He added, “We want the community to see that beekeeping can be done safely in an urban context. The hives at CHS meet this open to the community criteria. They are easily visible to the surrounding neighborhood, passing vehicles, students and visitors to the campus.”

As to why it was important for the city to get on board, Sharon Patrick, a member of the Carrboro Environmental Advisory Board, said, “Because pollinators are responsible for one-third of the food we eat, we are committed to creating and maintaining sustainable habitats for pollinators through education and example.”

Decatur, Ga., with population of about 20,148, is another — a very new one, said Stephanie Van Parys, executive director, Wylde Center, adding that they were still getting themselves organized.

“We started last February and received the distinction of the first city in Georgia to become a Bee City USA last July,” she said. “The mayor and the city leadership were supportive from the outset and the city of Decatur is already recognized as a Tree City USA municipality.”

Asked what city department was put in charge of this endeavor, Van Parys said the Wylde Center and Decatur residents worked hand in hand with the landscape infrastructure coordinator, who is part of the public works department.

“Many residents have gardens that are home to diverse planting that support pollinators,” said Van Parys. “There are also a number of beekeepers across the city. The Wylde Center maintains two public gardens in Decatur and each is pollinator-certified. One of the projects of Bee City USA is to survey the residents to see how many yards are pollinator-certified by the National Wildlife Federation and how many people keep bees.”

Weather doesn’t usually present a problem, said Van Parys. No ice days in Georgia; however, the state is in a stage two drought right now, which is actually a challenge for pollinators, as they require water.

“Also, we’ve not had any cost associated with the project at this time,” said Van Parys, “nor has it affected any of our purchasing decisions.”