Are you looking to boost your local economy and tourism? Consider hosting a triathlon event. Those who have say that doing so definitely created economic profit for their community, and in many cases had a ripple effect. 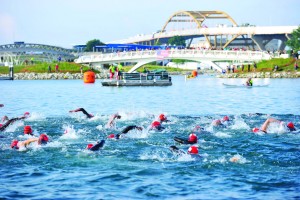 The percentage and amount of profit recouped depends on the type of event hosted: A sanctioned national championship event will bring in more people and, therefore, more money. But host cities report that even smaller events bring in revenue and benefits above any cost involved.

Take the King Boreas Winter Carnival Winter Triathlon in St. Paul, Minn., for example. Its January triathlon is a 5K run, 17K bike and 7.5K ski, instead of swim.

Jeremy Sartain is race director. He said he expected the economic boost from the event to be less than that of a summer triathlon, but because organizers combined this new event with the established King Boreas Winter Carnival, some of the usual costs won’t apply. It also won’t have to pay park rental fees, and since much of the race, including the skiing, takes place on existing cross country trails, only one road had to be blocked.

The cost of the permit to close that road was $90. There were some soft costs, but Sartaub estimated the revenue earned by hotels and restaurants during the triathlon to be $7,500–$8,000.

“Not a massive amount, but the athletes and their families may visit our sponsor shops,” he said, adding that most important was the good exposure for the city. “The marketing alone reached well over 1.2 million people.”

Spooner, Wis., hosted a triathlon for several years to raise funds to build a playground at the lake. The Lions Club, city officials and several volunteers partnered to host it, and the costs were T-shirts, chip timing and sanctioning by USA Triathlon, which worked out to about $20 per entrant. Organizers charged $60 for early registration and $80 for late registration, and had about 200 participants each year.

Key to a successful event, said Sartain, is having someone who understands the sport in a leadership role: plus communication with the public and any businesses that may be affected by road closures. 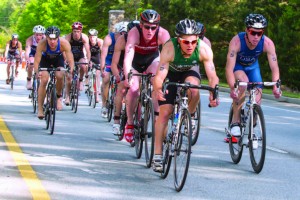 A group of college athletes representing 120 universities participated in the Clemson, S.C., USAT National Collegiate Triathlon last spring. The city invested $45,000 over two years to bring the event to town and received $20,000 in grants to help cover expenses. (Photo provided)

The city of Milwaukee has seen a tremendous economic boost by hosting the national championship USA Triathlon for the last three years. Kristin Settle of Visit Milwaukee said that, aside from the revenue generated, “the larger impact was the sense of pride we felt by being chosen for a third consecutive year. That’s never been done before. They loved Milwaukee so much!”

Lindsay Wykowski of USA Triathlon agreed it was unprecedented. USA Triathlon normally operates on a two-year rotation for its national championships.

Numbers are not final yet for 2015, but in 2014 the largest event in USA Triathlon’s history was the event in Milwaukee. Approximately, 4,800 participants over two days qualified for the national championship.

“That’s the larger end of what a triathlon sees — it was one of the top three largest events in the country and generated over $11 million in revenue for the city,” Wykowksi said. “By contrast, in 2013 the same event in the same city but with fewer participants generated $5.7 million.”

That event is on the higher end for economic impact, she said, and compared to the duathlon in St. Paul, “that’s a pretty stark difference. If you’re attracting a larger audience, you’re going to raise more money.”

Settle noted that by hosting the triathlon Milwaukee was able to “showcase our city to the athletes and their families — our amazing lakefront and beach, museums and restaurants and our downtown area.”

Since venues such as the art museum and Discovery World were utilized for staging or parking, there were costs involved, along with police costs, coast guard and Harbor Master costs. Regardless, “you recoup those costs in so many ways, and from a public relations perspective, you can’t pay for that kind of good presence,” Settle said. 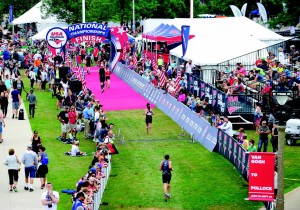 Clemson, S.C., partnered with Clemson University to host a USA National Collegiate Triathlon last year. Clemson Parks Program Director Jaime Cathey is also an adjunct professor at Clemson University’s Park, Recreation and Tourism Department. She said that the full economic benefit of the 2015 race isn’t yet known, but based on research conducted by students, “conservatively, it was over a million dollar impact for a $45,000 investment over two years.”

She said for a town like Clemson, which has approximately 14,000 residents and an additional 20,000 students at the university, that’s considerable. She added that in the spring and summer, when the college kids are gone, it’s important to host events like this to help businesses thrive.

The two entities paid a rights fee to USA Triathlon; rented some university facilities; and paid police and EMS, which Cathey said were the biggest expenses. A volunteer rescue squad was utilized, which saved some money. 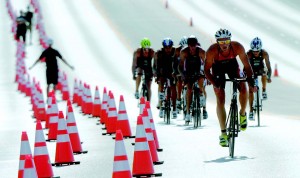 USA Triathlon owns and operates four national championships each year, but the National Governing Body sanctions more than 4,300 events annually for athletes ages 7 to 80-plus. The Youth & Junior National Championships has been in West Chester, Ohio, since 2011 and sold out to nearly 1,000 athletes ages 7–19 the past two years. The Butler County CVB and an incident management team are heavily involved in the event’s production. (Photo: Erik Schelkun/USA Triathlon)

The partnership with the university has been great, she added. In fact, since the city doesn’t have a beachfront and is only 7 square miles, it was a necessity. The event is a boost for the college as well, because the athletes are college students who may be looking for a graduate school. This year a high school race will be added, bringing additional exposure to the university.

Most of the revenue generated from these events goes to hotels and restaurants. The city’s parks and recreation department receives revenue from a hospitality tax, though, making it is an indirect recipient. “If the question is — is it worth it? It’s definitely worth it,” said Cathey. “To see the events and the spotlight it puts on our town — it’s fun to see Clemson come alive.”