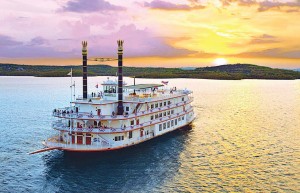 Branson, Mo., didn’t start out with the goal of becoming an international destination for great music. But beginning in 1967, the venues just keep popping up. (Photo courtesy Branson CVB) 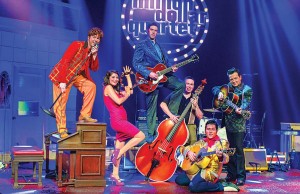 The White River, the river’s two dams and historic Marvel Cave are among the naturally beautiful locations that entice visitors to step beyond the music halls and into the greater Branson area. (Photo courtesy Branson CVB)

More than a century ago, the unrivaled reputation of Branson, Mo., as “The Live Entertainment Capital of the World” was, quite literally, carved in stone.  The past It all started with a cave and a book.

In 1889, seven years after Reuben Branson opened a general store and post office to anchor the town’s location, William Henry Lynch purchased nearby Marble Cave (renamed Marvel Cave in 1950) and the square mile of land surrounding it. He opened the cave to the public and began leading tours that lasted eight hours and were illuminated by candle or lantern. The attraction drew the first stream of families to the area, some of whom, enraptured by the natural beauty of the place, nestled in for permanent residence.

Harold Bell Wright came for a different reason, but his presence irrevocably boosted the area’s popularity. Wright, a Kansas native, traveled to the Ozarks at his physician’s urging. In 1907 he published “The Shepherd of the Hills,” an enchanting and captivating story about the local populace, wooded valleys and Marble Cave.

The book was wildly successful, selling millions of copies and inspiring four movies, one starring John Wayne. It also started a steady flood of visitors.

The completion of the Ozark Beach Dam in 1913 added another beautiful haven for travelers to the area: Lake Taneycomo. Families came to swim, hunt, hike and enjoy the outdoor theater rendition of “The Shepherd of the Hills,” and Branson never looked back.

Legendary country singer Red Foley moved to the area to host “Ozark Jubilee,” one of the first successful network television shows. In 1959 a quartet of brothers, under the stage name of the Baldknobbers, combined country tunes, Ozark mountain music and comedy, performing two shows a week. Ten years later they built a theater on Highway 76, which gracefully meanders west of downtown Branson.

Enhancing the village’s reputation, the “Beverly Hillbillies” filmed five episodes there in 1967. That same year, the Presley family (no relation to Elvis) became the first performers to build a music theater along Highway 76, now known as “The Strip.” Over the next 25 years other famed musicians migrated to Branson and built their own venues, including Roy Clark, Box Car Willie, Jim Stafford, Ray Stevens, Mickey Gilley and Moe Bandy. By the time “60 Minutes” hailed Branson as “the live music capital of the entire universe” in a 1991 episode, 22 theaters had opened along Highway 76.

The city and its businesses and residents wasted no opportunity to enhance business. During the gasoline shortage in the 1970s, a group of Branson businessmen pooled their resources to purchase a supply of gasoline. They filled the tanks of those who were on their way out of town after arriving by car, boasting: “If you get here, we’ll get you back.”

Today the city of 10,520 draws more than seven million visitors annually, a daily average of 20,000. To accommodate the crowds, it boasts 20,000 rooms in bed and breakfasts, motels, hotels, resorts and condominiums. The city’s 125 restaurants can collectively seat 30,000 patrons.

The area offers 52 live performance theaters, 12 championship golf courses, an award-winning theme park and hundreds of other family-oriented entertainment events. Its dozens of museums include those devoted to the Titanic, children’s toys, Ripley’s Believe It or Not!, celebrity cars, dinosaurs and space exploration.

Even the names of venues call out “Families, enjoy good, clean fun here.” They include Ride the Ducks, God and Country Theatre, Dixie Stampede, Americana Theater and RecPlex.

Branson is not sitting on the laurels of its continually increasing success. The city has invested $42 million in road improvements since 1991, and the municipality is spearheading Community Plan 2030, a 20-year capital improvement plan. The recently published plan, by it own definition, “is the city’s policy manual for use in the daily planning decisions regarding growth, development, and provides direction for current and future development within the city limits.”

The 219-page document addresses growth management, economic development and redevelopment and provides a framework and guidebook to enhance an inviting community and multi-faceted tourism economy for the next 20 years.

Another major project in the works is New Spirit of 76, designed to transform a 5-mile stretch of “The Strip” into a Complete Street. The multiyear plan involves redesigning and reconfiguring the corridor to safely and scenically accommodate pedestrians, cyclists, motorists, trolleys and public transportation, thus encouraging more “stay time” for visitors. Among the amenities under the new plan are pedestrian promenades, crossings, gathering and resting points, unique theming for sections of the area and pleasant landscape and streetscape features.