In September the National Recreation and Park Association hosted its 50th Anniversary Conference in Las Vegas giving professionals the opportunity to network, learn and look forward to developing the exciting parks of tomorrow. 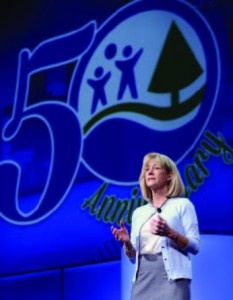 This professional metropolitan organization, which has been around far longer than most municipal-related groups, deserves kudos for its passion in keeping updated on state and national issues and implementing needed changes to parks and recreation areas so that everyone may enjoy their leisure and outdoor time safely.

According to Sonia Myrick, managing editor of Parks & Recreation Magazine many challenges were faced by the group.

“The merger of these similar yet disparate organizations would not be easy,” wrote Myrick, in the August issue of Parks & Recreation Magazine. “For the NRA, the largest of the founding organizations … it was very important to preserve its tax-exempt status under Section 501(c) (3) of the Internal Revenue Service Code. This was not the case for the AIPE and ARS, which … were classified as trade or professional organizations and whose donors were prohibited from deducting their contributions.” 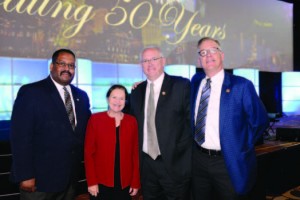 Myrick lists other obstacles, including logistics, staffing, resignations and budget woes, that were eventually overcome. “By its 25th anniversary, the NRPA was again experiencing growth and enjoying a healthy financial state. Partnerships with other like-minded national organizations were instrumental in helping to spread the word about the importance of recreational outlets …”

Today, the organization’s objectives remain the same as they were then. Conrad Wirth, then vice-chair of NRPA’s Administrative Board, elaborated them in his 1966 editorial in Parks & Recreation magazine.

“In closing, I wish to say, in as few words as possible, what I hope the National Recreation and Park Association will accomplish. I want it to foster: excellence in park and recreation administration; a demand by the public for an adequate national system of parks and recreation areas at all levels of government; provisions for advanced research; planning to improve parks and recreation facilities to meet the public’s requirements; public realization of human environmental requirements; a strong human protective instinct for resource use and preservation; and the establishment of a high standard of excellence in professional ability and accomplishments.”

Founding NRPA in 1965 was a great first step in identifying the needs of Americans then and into the future, said Matt Brubaker, NRPA marketing manager.

“NRPA and our membership agencies have made great strides over the last 50 years to improve the health and wellness of communities all across the country.

“Our goal has been to help create healthy and sustainable communities, protect natural open space and make parks accessible to all people. We have done this in a variety of ways over the last 50 years, including developing after-school and summer feeding programs, various programs that connect kids to nature and by giving underserved communities the parks they deserve through our Parks Build Community projects.”

Dr. Tony Mobley, dean emeritus of the School of Health, Physical Education & Recreation (Public Health) of Indiana University, and executive director emeritus of the National Recreation Foundation, goes back to an impressive 50 years ago, when he attended the first congress (now, “conference”). At that time the NRPA had just been organized, with the merger of the five organizations. He has since attended 46 of these conferences.

“This year’s conference was extremely successful,” said Mobley. “The organization has seen a great deal of change over the years … and the demand for recreation and park services has grown dramatically over the years. Due to changing conditions in the country, it is even more critical that citizens and professionals press even harder for support!”

According to Brubaker, too, the event was a triumph.

“After almost nine months of anticipation, the celebration of NRPA’s 50th anniversary began at the opening general session with a look into our rich past and the promise of our future, “ said Brubaker.

“I think the whole conference experience reminded everyone why we have been doing this for the last 50 years and how important it is for us to continue to improve the quality of life for all for the next 50 years and beyond.” 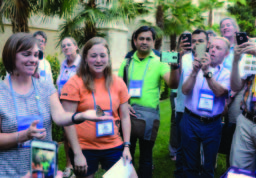 Demonstrated at 50th anniversary National Recreation and Park Association Conference, butterflies can be tagged and released to find out more about their great migration. (Photo courtesy
Caught in the Moment Photography)

As part of the anniversary celebration, the organization also looked to the future. It aimed for 50,000 members in 2015, and in just five months their goal was met. Conference participants were also encouraged to brainstorm ideas for parks of the future, including using hashtag #NRPA50 on social media to share their visions of tomorrowland in the parks. And fittingly, there was a Park of the Future Student Competition.

What will the parks of the future hold? According to Brubaker, that’s a hard question to answer.

“It’s hard to say exactly where we will go in the future, but if the last 50 years are any indication of the amazing things that parks and recreation can do for communities across the country, then I’m sure we will continue to make a huge impact,” said Brubaker.

“NRPA will continue to strive to help create healthy and sustainable communities, protect natural open space and make parks accessible to all people.”