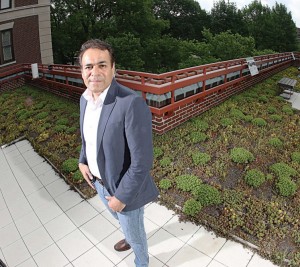 According to Indiana state climatologist and former civil engineer Dev Niyogi, urban heat islands created by concentrations of pavement and buildings in municipalities can be mitigated by encircling those areas with green spaces and spacing parks throughout the city. (Photo by Tom Campbell)

When Dev Niyogi swapped a career in civil engineering for climatology, he had little idea that his new field would take him straight back to the cityscape. Nor could he have foreseen that his research would make him an expert on the complex relationship between urban development and regional climate.

Now the Indiana state climatologist, Purdue’s Niyogi, is deciphering the myriad ways that a city directs weather patterns within its boundaries and beyond.

“In the same way that a city’s culture and economy have impacts beyond city limits, an urban area also has an environmental footprint that is larger than itself,” he says. “How this patchwork of suburbs, townships, roads and water systems comes together to modify a regional climate — and how climate in turn affects a city’s socioeconomic pulse — is truly fascinating.”

Urbanization dramatically alters a landscape and its environment, more so than other human-driven changes such as agriculture and deforestation. The distinctness of cities from their environs lends them serious climatic clout. Cities of a certain size can create their own “microclimate,” raising local temperature, shifting rainfall and humidity levels, and altering air circulation and wind flow.

“Cities are like living entities,” Niyogi says. “They all have their own soul and manner in which they evolve. And the ways that cities influence regional climate are not only pronounced, they are somewhat permanent. These changes affect our day-to-day life.”

Hot time in the old town

One of the most pronounced ways in which a city affects local climate is by artificially raising air temperature, a phenomenon known as the “urban heat island effect.” First noted in 19thcentury London, cities are often warmer than their surroundings by about two to six degrees Fahrenheit and 10 to 20 degrees at night, a result of the heat absorbed by and generated from structures and streets. Steel, concrete and dark surfaces amplify this effect, and greenhouse gas emissions from buildings and vehicles trap heat and delay the development of rain.

Paving over areas once topped with soil and vegetation removes some of nature’s most efficient cooling systems, and impermeable materials such as asphalt boost the amount of heat stored in the ground. Roads and buildings also form sets of “urban canyons,” absorbing solar heat and blocking winds.

An urban heat island is no tropical paradise: The added warmth and moisture can be welcome in winter months, but they also can exacerbate heat stress and heat-related illnesses, lend an extra edge to heat waves, lower air and water quality, and drive up cooling costs.

“We need to start engineering cities to minimize their unintended impacts on the environment,” says Niyogi, also a professor of agronomy and earth, atmospheric and planetary sciences.

Niyogi and Purdue computer scientist Daniel Aliaga are using a grant from the National Science Foundation STRONG Cities project to develop innovative computational modeling tools that can help city planners simulate how changes to a city layout could influence urban weather and hazards such as drought and flooding. The tools generate detailed 3-D city models, predicting the shifts in temperature, rainfall and humidity in a variety of “what if” scenarios — if more green spaces were added, for example, or traffic patterns were reshaped.

Using Indianapolis as an example, Niyogi and Aliaga found that encircling the city with green spaces would lower temperature and modify rainfall. Distributing parks throughout the city, however, would cool it off even more.

Because cities modify airflow and temperature, they also affect the development of severe weather and storms. Niyogi and doctoral student Paul Schmid showed that cities influence the size and intensity of thunderstorms many miles away and direct where and when rain falls. A storm rolling toward Indianapolis, for instance, is likely to split over the city and strengthen downwind.

Another study co-authored by Niyogi showed that about 61 percent of tornadoes in Indiana touch down within a half mile of urban areas, suggesting that the abrupt shift between urban and rural areas may contribute to the formation of severe weather.

Increased “surface roughness” — an abrupt change in the height of land surface features — can stretch or squash a column of air, increasing the air’s rate of spin, which could contribute to the formation of severe storms.

Every storm is unique, and a variety of factors influence storm intensity and the potential for tornadoes. But identifying areas of high risk could help urban planners design cities with fewer of the conditions associated with producing severe weather. Cities with a contour that gradually fades into the countryside rather than stopping suddenly at the city limits may be less likely to trigger tornadoes, Niyogi says.

“We might need to pay more attention to areas where land surface features transition from rough to smooth, flat to sloped or wet to dry,” he says. “These changes in landscape may provide conditions that can create severe weather.”

The grassroots of green 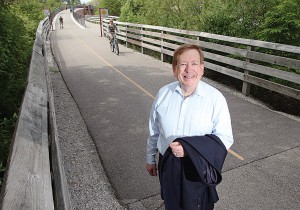 Carmel, Ind., mayor Jim Brainard has spearheaded initiatives to
increase the city’s green spaces and is looking at other planning
and development projects that could be adjusted to reduce traffic
and improve the city’s ecological impact. (Photo by Tom Campbell)

Researchers are not alone in calling for a rethink of the modern city. Joining them are those who perpetually have American cities on the brain: their mayors.

After the U.S. Senate did not ratify the Kyoto Protocol in 2007, a group of mayors led by Seattle’s Greg Nickels banded together in a pledge to lower the greenhouse gas emissions of their cities to the levels proposed in the protocol.

As the latest federal carbon-cutting proposals meet congressional gridlock, the nation’s mayors are pitching in to tackle climate change on their home turfs.

Green roofs, which cool buildings and improve water drainage, crown Chicago’s city hall and the Target Center in Minneapolis. City bicycle-sharing programs have cropped up in Washington, D.C.; Boston; New York; and Denver. Seattle’s rain gutters have small holes to allow filtration, and many of its downspouts have been redirected to gush onto semi-permeable surfaces.
It’s a start, Niyogi says.

“Climate change is too important and complex to be solved with a single approach. Global and national efforts to curb greenhouse emissions could have a greater impact if city-scale efforts are also made to reduce the effects of urbanization.”

One such forward-thinking mayor is Jim Brainard whose leadership of Carmel, a community of 80,000 north of Indianapolis, is largely based on the idea that the city’s quality of life and environmental health are intertwined.

A member of the White House Task Force on Climate Preparedness and Resilience, Brainard was an early endorser the U.S. Conference of Mayors Climate Protection Agreement, which was also signed by the mayors of Bloomington, Indianapolis, Fort Wayne and several other Indiana cities.
Since his election in 1996, Brainard has spearheaded eco-friendly initiatives in Carmel, increasing the city’s green space from 40 acres to 800, rethinking the transportation grid and tailoring new developments like elegant Arts and Design District to foot traffic rather than cars.

“The economics of sprawl don’t make sense,” he says. “We want to build a city that’s easy to live in.”

To counter drive time, the city improved the interconnectivity of its roadways and installed shopping “nodes” in suburbs to lessen the need to travel across town for groceries. Roundabouts have replaced traffic lights at 85 intersections, cutting accidents by about 80 percent, reducing carbon emissions and saving millions of gallons of gas.

“It takes far more energy to start a big, heavy object from a state of rest than to accelerate it from 15 to 30 miles per hour,” Brainard explains.

Other projects include switching out the city’s fleet of municipal vehicles with hybrid and flex-fuel cars, repurposing biosolid waste as fertilizer, planting street trees, laying down semi-porous pavements and creating a network of 125 miles of paved bike trails, many of them tracing former railroad lines.

Footing the bill for a smaller footprint 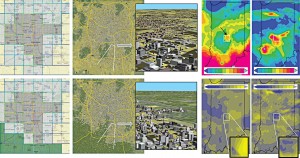 Daniel Aliaga, a Purdue University computer scientist, is working with colleague Dev Niyogi on the climatological effects of urban heat islands, which even affect the formation of thunderstorms and tornadoes. They have developed interactive 3-D models to simulate how changes to urban planning would affect local climate. Above, one such model depicts how a mixed design layout in southern Indianapolis would alter temperature and rainfall in the area. (Image provided)

Cynics may cite Carmel’s extraordinarily high per capita income — sixth in the nation — and ask whether these kinds of initiatives are limited to cities with a wealthy populace.

Not necessarily, says Brainard, who points to his city’s tax rate, the lowest in the state. To pay for its projects, the city diverted taxes from new developments and used monies from its general tax fund to borrow the remaining amount.

Brainard also sees the redesign as a strategic investment in Carmel’s future. “If you want to attract employers and the best and brightest college graduates, build a family-friendly city with clean air and a safe water supply,” he says. “It makes fiscal sense to invest in these kinds of changes.”

About half of the world lives in cities—a historic first and an amount that could rise to 70 percent by 2050.

The quality of future life in urban areas may hang on our ability to steward our energy, food and water resources in the present as well as how cities adapt to a climate in which “extremes will very likely be the new normal,” says Niyogi, who describes cities as the “canaries of climate change.”
If the global temperature is set to rise by two to six degrees Fahrenheit, then cities — already warmer than their surroundings — provide a glimpse into the future of the planet.

But while cities are on the front lines of an evolving climate and its consequences, they are also prime testing grounds for climate-neutral or even climate-positive initiatives.

“What is happening now in cities and what we learn from them could provide us with tools to apply to much larger regions,” Niyogi says. “Cities can provide the prototype of what the world could be.”