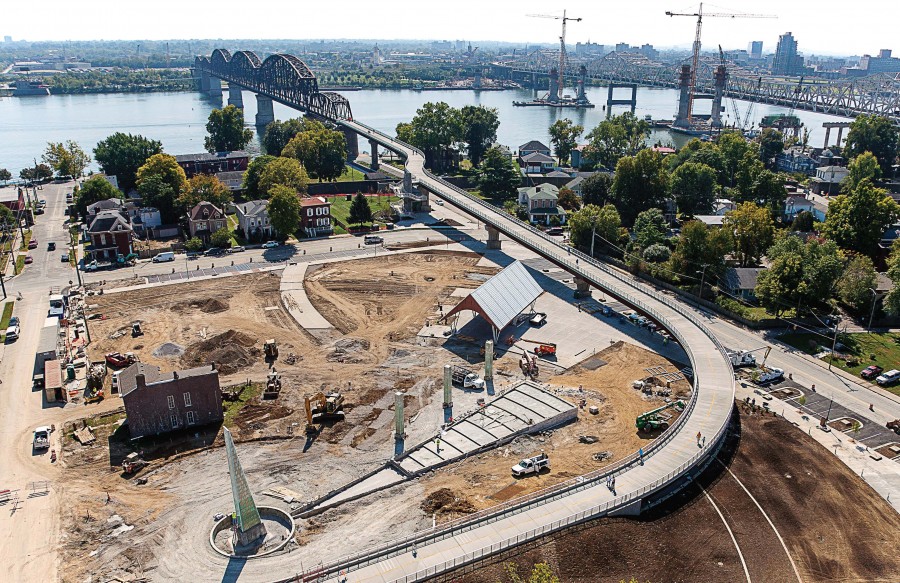 Looking south from the Big Four Station in Jeffersonville, Ind., that was under construction earlier this year, the Big Four Bridge walkway over the Ohio River is visible. In the background is the city of Louisville and construction cranes that are building the northbound I-65 bridge nearby. (Photo provided by hntb Corporation)

Jeffersonville, Ind., a city of approximately 45,000, is experiencing a downtown resurgence. That new life has come in part due to a recently completed, $22 million project known as the Big Four Bridge — a former railroad truss bridge that crosses the Ohio River and connects Louisville, Ky., with Jeffersonville.

Named for the Cleveland, Cincinnati, Chicago and St. Louis Railway, which was called the Big Four Railroad, the 2,500-foot-long bridge hasn’t seen a train since the mid-1960s. Instead, it’s filled with pedestrians and bicyclists looking for a little exercise and adventure.

“The reclaimed bridge has attracted many people to reconnect to the river and has created redevelopment opportunities to generate tax revenue,” said Eric Goodman, vice president of API, a local development and construction firm. “The bridge promotes a sense of pride within the community and encourages healthy activity, connectivity to Louisville, family gatherings and provides historical references to what leads us all to Jeffersonville in the first place — the Ohio River.”

“Our downtown was similar to many other downtowns in the Midwest,” said Jeffersonville Mayor Michael Moore. “Local shops usually closed their doors by 5 p.m. and there was nothing going on. Now all of a sudden, with the extra foot and bicycle traffic, we have a new customer base and developers from bigger markets are investing in our city.”

But getting to this point wasn’t easy. In the 1990s leaders proposed converting the former railroad bridge into a pedestrian walkway, but the work didn’t get underway until 2009. In February 2013, the ramp on the Kentucky side was completed. The Jeffersonville ramp opened on May 20 and cost $10 million, with the state of Indiana kicking in 80 percent and the city of Jeffersonville applying $2 million in tax increment financing dollars. 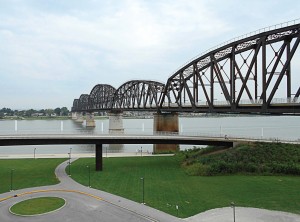 The Louisville side of the Big Four Bridge, pictured, opened in 2013. Since the opening of the Indiana-side ramp this year, walkers and bikers can now not only cross the Ohio River on the bridge but continue into downtown Jeffersonville to eat or shop. (Photo by Diana Likens)

Indeed, both cities seem to be benefiting from the project. Kelly Phillips, director of neighborhood and business development for Jeffersonville, said close to 10 businesses have opened downtown just since the bridge opened this spring. Five of those have been restaurants, including one owned by Matthew McMahan called Big Four Burgers. The burger joint saw a sales spike of 25 percent as soon as the ramp on the Indiana side opened.

“The bridge has been amazing for our restaurant,” said McMahan. “Not only do we get people from Louisville, we get a bunch of Hoosiers that want to come walk the bridge. They walk over then usually come back to the Indiana side to eat and drink. It truly has been awesome.”

It’s not just new businesses that are thriving. Phillips said that existing business owners tell her their sales are up anywhere from 200 to 900 percent since the bridge opened.

Things don’t seem to be slowing down any time soon. Phillips said she gets developers calling every day asking about mixed use development in addition to restaurants and retail.

“We have the fewest number of vacancies downtown since the ’50s,” she said. “Fifteen years ago, downtown was dying and now it’s turned around.”

Goodman agreed. “We live, work and play in Jeffersonville and our property values continue to increase. My wife’s salon is doing very well … and we have received numerous calls for retail space and residential units at our Big Four Station project, which is an indicator of the need within the market.”

What’s next for Jeffersonville? The city broke ground Nov. 3 on a $3 million downtown marina on the Ohio River. Plans call for a complete overhaul of existing boat docks and the addition of a fishing pier. The city is also sprucing up downtown sidewalks, lighting and the main thoroughfare through town. Facade grants are available for businesses looking to spruce up their buildings, and officials want to bring more people downtown to live. 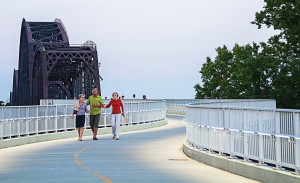 Pedestrians enjoy the Big Four Bridge one evening. The ramp was constructed to connect the community to the already existing bridge, and lighting was installed within the handrail in order to not overpower the surrounding historic residential neighborhood. (Photo provided by hntb Corporation)

“Now that we’ve seen a resurgence in shops and commercial use, we’re concentrating on residential,” said Moore. “In order for a community to thrive, you can’t have everyone driving 20 minutes outside downtown to live. We’re working with developers to revitalize older properties into apartments and brownstones.”

Aside from the downtown resurgence, Moore also believes the Big Four Bridge is boosting economic development efforts for the region. When American Fuji Seal was looking for a location for 200 advanced manufacturing jobs, the mayor said the executives saw Jeffersonville’s vibrancy. The parks and recreation programming, thriving downtown and positive community spirit helped convince the company to locate in the area.

“Economic development these days demands that you pay special attention to quality of life issues,” said Moore. We are focused on attracting higher wage jobs and bringing our kids back home after graduating college. To do that, we have to have a high quality of life.”

With the Big Four Bridge project complete and the new marina underway, Moore said that focus on quality of life issues is paying off for current residents and future generations.