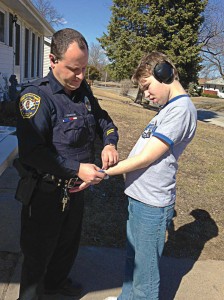 Quincy, Ill., Officer Tom Liesen fastens a tracking device to the wrist of a 19-year-old boy with autism. (Photo provided)

Project Lifesaver International has an envious record of swift responses for locating wandering children and adults who have autism, Alzheimer’s disease, Down syndrome and other conditions. Many at-risk people have been found within minutes, and all within one hour, recently in the states of Virginia, New York, New Jersey and Arkansas, where the program is active.

Saunders retired as captain from the Chesapeake, Va., Police Department in 2001. During his 33-year career, he served as commander of special operations, which included swat and search and rescue. He became troubled by the number of searches for Alzheimer’s patients, for which his department had no expertise, that resulted in many tragic endings — also costing money and manpower. 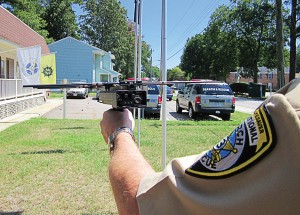 Law enforcement and first responders who use the Project Lifesaver International program utilize a radio-frequency tracking receiver to tune into the individualized frequency on transmitters clients wear on their wrists or ankles. (Photo provided)

“I placed the first transmitter in 1999 and the program grew … now we’re in more than 1,300 agencies and have seen our members rescue more than 2,700 at-risk wanderers,” he said.

Project Lifesaver differs from other search programs. It’s a program, not a product, and it incorporates training, education, certification and support for member agencies.

“This gentleman, who wore a radio-tracking wristband, had dementia and climbed up a closet and into the ceiling,” recalled Saunders.

“Before climbing into the closet, he had locked the door behind him. When I entered his room to look for him, the only locked door was the closet and the signal was coming from that area. But they hadn’t searched it because it was a locked door.”

A staff member unlocked it, and the man was found lying across support elements of the closet walls.

Tom Liesen, a local Quincy police officer who is also a nationwide PL instructor, recalled a search in December for an elderly male client with dementia who was missing from his apartment.

“We responded with our PLS receiver and got both weak and strong signals when we spotted him some distance away,” said Liesen. “We approached him, but we weren’t sure it was him because his hair was cut short and his beard was completely shaven off. He didn’t look anything like the picture we had of him. He was wearing a T-shirt, an unzipped winter coat, scrub pants down around his knees and a diaper and shoes … It turned out that his caregiver had left while the gentleman was sleeping that morning. It was snowing hard and very windy with a temperature of only 30 degrees. We successfully returned him home.”

“The public response to this has been great,” said Fridley, who is in the process of training more deputy sheriffs on the program.

“We haven’t had to use Project Lifesaver as of yet, and hope we never do, although we have four trained deputy sheriffs for the program. We also use local volunteer fire departments and civil air patrol to assist in a search and rescue.

“I think it’s a great project. Larger departments can cut down on the time to find someone who is missing. The majority of our bracelets being for patients with Alzheimer’s — that’s especially helpful for departments in rural settings such as ours.”

“I was a volunteer in New Brighton, and a sergeant with the New Brighton police saw an article in a Sunday newspaper about Project Lifesaver in 2005,” he said. “The volunteers were asked if anyone would help investigate the need for PL and I put my hand up. I later realized that my dad, who had died, would have been a candidate for the program.

“We presented our research to the city council and they gave us the go-ahead, but said we had to raise the money to implement it. It took a year to raise the $12,000 … Today, it doesn’t take that much money to start the endeavor, due to federal grants.”

According to Parrott there are two types of tracking device bracelets used in PL. The radio tracking is the more common one, and the newer one is a watch that uses GPS.

The tracking device can be fastened either to the wrist or the ankle and is similar to a hospital identification band. It’s waterproof, worn 24/7 and transmits a radio pulse every second. The units are leased, and each bracelet emits a signal on a channel used by law enforcement for tracking people at risk. Only one battery change is required, and the radio frequency technology can work in places such as a heavily-wooded area, buildings and shallow water.

“There are circumstances where one is better than the other,” Parrott said. “If someone is more likely to drive away or easily hitch a ride, they could more quickly get out of range with the radio transmitters and the GPS units would be better in that case. The disadvantage of GPS is that it will get you close but won’t tell you exactly where the person is, so if ‘close’ got you inside a huge mall, you would still have a massive search to do whereas radio tracking would point you right at the person.”