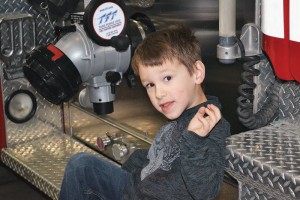 Dylan Brown is one of the many children born each year with autism. Encountering autistic individuals can make securing a life-threatening scene doubly challenging. (Photo provided)

A call comes in for a fire at a group home, which houses mentally-challenged adults. The caregivers have gotten nearly everyone out safely, but one of the non-verbal adults, who has Asperger’s syndrome, is high on adrenaline and is physically panicking at a second floor window. He cannot understand directions as you — the fire fighter — climb in the window of the burning room with intentions of getting him down the ladder safely.

What do you do so that both you and the terrified victim are safe?

Autism and its related disorders — Asperger’s syndrome and unspecified pervasive developmental disorder — are some of the most rapidly growing global disabilities. Because each case is so different, it is difficult for first responders to plan exactly how to handle such adults and children in an emergency situation.

A person with autism may be verbal or non-verbal; he or she may do things repetitively, such as body rocking, crossing and uncrossing of legs, marching in place or having seizures or meltdowns. Yet, sometimes people with autism can marry, go to college, have sex and do any number of other things.

According to the website www.Prevent-Educate.org, which makes first responders aware of the disability and offers information and safety-centered staff training, “new statistics show that at least a million children and adults have a diagnosis of autism or a related disorder … one out of every 88 children in the U.S. is born with some level of autism. This is up 78 percent in the past decade.”

John Sokol, program coordinator and executive director of the Illinois-based curriculum and captain of the Pembroke Fire Protection District, said simply, “the secret to prevention is education.” Through the website, he offers critical safety information and training for first responders in approaching individuals with autism in emergency situations.

“Individuals with autism are so unique and their actions so unpredictable that this training is not only for their safety, but the firefighters and EMTs as well,” said Sokol. “If you walked into a fire and went to grab the individual, and he acted out not in fear of you, but in fear of being touched, you can get hurt as a result. There’s no room for mistakes in the field. Everyone’s safety is important.”

A Crisis Intervention Team was begun in Memphis, Tenn., and has served as a model to other municipalities around the country by partnering with the National Alliance on Mental Illness to bring current information, training and education to first responders. Currently, the Memphis PD has 225 CIT officers who participate in this specialized training under the supervision of mental health providers, family advocates and mental health consumer groups.

Captain Scott Russell of the Broward County, Fla., Sheriff’s Office spoke highly of the Memphis team concept model, which was brought to his county and replicated in his department. Personnel
underwent 40 hours of training that incorporated a good portion of developmental disabilities, including Asperger’s syndrome, information.

“We are much better prepared, thanks to this extensive training, to handle an emergency with someone with autism, should it occur,” said Russell.

Rachel Vance, executive assistant of the Metropolitan Nashville Police Department Office of Public Affairs, provided material used by the MNPD Training Academy to instruct new recruits during their academy training and also officers during annual in-service training. Highlights include recognizing and approaching people with autism, who may appear “spacey” or on drugs, touch strangers in socially inappropriate ways or act hyper; observing their behavior; and pausing to “permit a calm atmosphere to develop; prevent possible overstimulation or confusion.”

Finally, appropriate responses by law enforcement are given, such as “talk in short phrases, allow for delayed responses to commands, avoid touching the person, examine for presence of medical alert jewelry or tags — the person may have seizure disorder,” and other tips.

Many states have already approved this continuing education course for their EMS personnel. Register at the Prevent-Educate website for more information on how your department can handle emergency situations involving autistic victims.