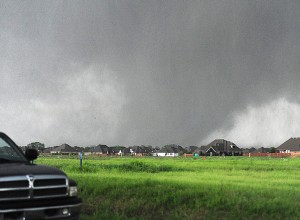 The second EF4 or EF5 tornado to hit the Oklahoma suburb of Moore ripped through the city in May, claiming 24 lives and traveling the same path a 1999 twister took.
(Moore Monthly/themooredaily.com)

Whenever and wherever tragedy occurs, Americans respond. Superstorm Sandy, the Newtown shooting, the Boston Marathon bombing and tornados ripping through the heart of Oklahoma have all prompted folks to dig deep in order to help those affected by disaster. However, organizing that outpouring of support is challenging. Municipalities not only have to coordinate aid from federal, state and local agencies, but a myriad of donations from the public and private sectors as well. 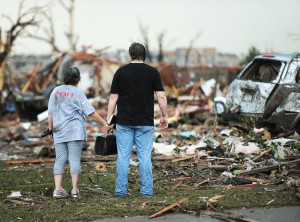 When a city needs to get back on its feet, allowing local businesses to take the lead reinforces both the economy and the community’s will. (Moore Monthly/themooredaily.com)

“Coordinating the work of so many different entities would be difficult under the best of circumstances. Immediately after a disaster is the worst of circumstances,” wrote Saundra Schimmelpfennig, who has over 20 years experience in the nonprofit world and is the author of the Good Intentions are Not Enough blog.

Schimmelpfennig said that chaotic post-disaster conditions, coupled with a surge of donations, can lead to a variety of problems at the scene of an event. “While well-intentioned, these efforts can often exacerbate the problems common to disaster relief.”

Deidre Ebrey, director of marketing and economic development for the city of Moore, Okla., understands those problems all too well. On May 20 an EF5 tornado twisted through the community, leaving 24 dead, an elementary school in rubble, countless homes destroyed and causing city hall to grind to a halt for several days.

“We are a small community of 60,000. When we have a 5K run come through town, it’s enough to stretch our resources to the limit. But this was overwhelming, especially when our own offices were without power and water,” she said.

Moore relied on the resources of neighboring Oklahoma City, as well as FEMA, for the first few days. They directed donors to make their contributions to national relief agencies until they could get their bearings and establish central funds of their own.

It wasn’t like April 18 when Boston Mayor Thomas Menino announced the establishment of One Fund Boston to serve as a central collection point for all donations relating to the Boston Marathon bombing. Ebrey said that when a city’s infrastructure is uncompromised, it is much easier to establish these options and coordinate assistance efforts.

“We now have those kinds of funds in place. If people want to donate to the animal shelter, the schools, the parks, whatever… they can. It just took a few days to be able to get those established.” 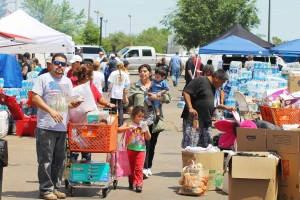 As kind as it is that Americans donate goods and services generously in response to tragedy, a dialogue is beginning about educating the public in regard to how cash donation can do more
good. (Moore Monthly/themooredaily.com)

In addition to coordinating day-to-day recovery efforts, Ebrey said there was also the task of figuring out what to do with the surge of supplies arriving from all over the world. Not only was space at a premium, but she also had to tactfully handle requests to meet with the mayor, tour the wreckage and receive public acknowledgement for offerings.

“How do you choose between a church that raised $100,000 and a corporation like Nike who just donated new athletic equipment to all of the schools?” Ebrey asked. “It’s really hard to make everyone happy. We’ve gotten to the point that we’ve asked the people who call and ask what they can do to hold off their aid until later when they can get the biggest bang for their buck.”

That can be hard, because folks genuinely believe their contributions are welcome and appreciated. While generosity is indeed treasured, donating household goods, food and used clothing does more to implode the recovery process rather than improve it. The Red Cross said financial contributions are the quickest and best way to help those who need it the most, but that doesn’t stop the public from packing up trucks of unnecessary items and heading down to the disaster site.

With a huge inventory of supplies still being distributed, Ebrey added that it actually created a backlash for the local economy. When there’s free hamburger on every street corner, residents refrain from patronizing restaurants and other stores that are still open for business. This creates a ripple effect: Those who may not have been impacted by the disaster initially now feel its aftermath.

“That’s why cash contributions are so important,” she said. “It gets the local economy moving again. I don’t think a lot of people understand that.”

When people aren’t buying things sales tax revenue drops, which hurts the entire community. She hopes that in light of recent disasters that more will be done to help the public understand why money is more useful than donations of old clothes.

“It’s all done out of love. I understand that, but there has to be more of a concerted effort to educate people on how to be responsible donors,” Ebry said. “We probably forestalled an even bigger flood of gifts by directing people to the Red Cross early on. But if there is ever a national campaign on responsible giving in the wake of disaster, I want to be part of it.”