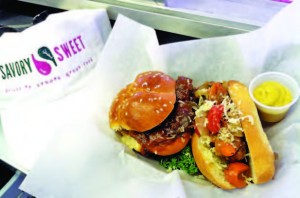 Food trucks are quickly shedding the old roach-coach reputation. They’re turning to gourmet recipes from Bohemian wraps to empanadas, making for a fast stop for the hungry. Pictured is a Whiskey Slider and Sausage slider made by Savory and Sweet in Knoxville.

After getting their start on the West Coast, food trucks now operate across the U.S., drawing in foodies and the simply curious consumer alike. Social media has aided this industry’s growth, with Tweets and Facebook posts alerting followers to food trucks’ locations.

However, as food trucks’ popularity expands, cities are faced with the dilemma of balancing the interests of food truck vendors, public safety and existing permanently-based businesses.

Louisville, Ky., welcomed the food truck craze in 2011, changing ordinances to accommodate them while protecting the interests of permanently-based restaurants. In Harrisburg, Pa., food trucks have been around for a several years. Meanwhile in Knoxville, Tenn., the craze is just getting started and the city is looking to change its ordinances as well.

The concept rolled into Louisville in April 2011 with the introduction of two food trucks. That number has since expanded to 15. Given their popularity, Louisville Mayor Greg Fischer and the Metro Council saw a need to adding a new regulation addressing food trucks. The change, which went into effect Oct. 14, 2011, has made getting around easier for the trucks. Vendors have to secure only one permit per vehicle, and buffer zones were reduced so food trucks can park 200 feet from residentially-zoned properties and 150 feet from brick-and-mortar food establishments that sell similar products. 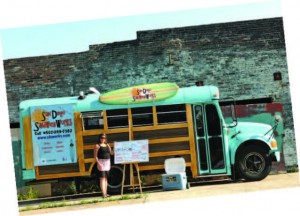 Kaaren Weyland operates the San Diego Sandwich Works food truck in Louisville, Ky., where she noted the level of cooperation between vendors and the city.

Kaaren Weyland, who owns San Diego Sandwich Works, started her food truck operation last year and has experienced these changes. “The mayor has really helped food trucks out by making the laws easier,” she said. “The number one change is, we can park on public streets.”

She noted that there is cooperation between fellow food truck vendors, with several being members of the Louisville Food Truck Association. Vendors even band together for some events, including a charity event for Blessings in a Backpack that will benefit local schools and children and takes place Sept. 15. Parking, according to Weyland, has not been an issue because vendors are allowed to park in metered parking as long as they pay the meter.

Of course, brick-and-mortar restaurants are not necessarily pleased to see the trucks. But Weyland notes that they don’t go and park near those establishments everyday, only about once a month — if that — for festivals. “I can understand their perspective,” Weyland said. “They put a lot of money into their buildings.”

Food truck vendors have maintained a good working relationship with the city and law enforcement. “As long as we are doing the right thing and obeying the rules, we don’t have problems,” Weyland stated.

Metro Louisville has made compliance easier for mobile vendors with its website, which contains a section dedicated to food trucks. In that section vendors can find relevant documents, current ordinances and other resources. 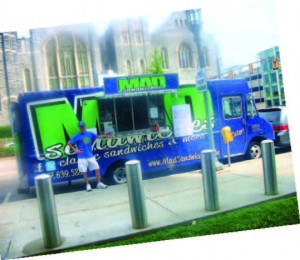 Rodrigo Madrigal, a retired jockey, and his wife, Olivia, operate Mad Sandwiches in Harrisburg, Pa. Madrigal enjoys the flexibility Harrisburg gives its food trucks, which allows him to go to where his customers are.

“I always liked cooking and entertaining people. I also always wanted a sandwich shop,” said Madrigal. For him, a food truck was a good, cheaper alternative to establishing a permanently-based restaurant. “It’s worked out well.”

At one point Harrisburg offered a variety of food trucks. The number has dwindled, though. Madrigal believes he’s among the last. He said other food truck vendors have gone out of business or moved on to other jobs.

Madrigal said there had been a huge fuss over one mobile food vendor parking in metered parking in front of a hotel on a street known as “restaurant row.” A group of 15 restaurant owners signed a petition in May 2011 and presented it to the Harrisburg City Council, hoping food truck vendors and hot dog cart vendors would be removed from the city. The restaurant owners also met with Mayor Linda Thompson in February. Madrigal attended the meeting.

“The mayor was very pro-food trucks, pro-small business,” Madrigal said. “She said she would not force the food trucks out of the city.”

Because of ongoing pressure, the vendor that was parking in front of the hotel decided to sell his truck despite not having violated Harrisburg’s food truck ordinances. Those ordinances prohibit food truck vendors from parking with 15 feet of any entrance and require drivers to place 50 feet between themselves and other street vendors. They also require the trucks to have operator’s and health licenses. Failure to comply with city ordinances can result in licenses being revoked.

That particular vendor had even procured permission from the hotel to park at the location.

Madrigal said that he hasn’t experienced much pushback, though — largely because of where he parks. “There are not a lot of other food places on Forster (Street),” he stated, noting that his second location on Walnut and Third streets also have very few competitors. “People have been supportive, coming back and bringing friends.” In fact, members of the police department are known to stop by for a Cuban sandwich, which Madrigal immediately prepares when he sees them coming. “They’ve all been very supportive.” 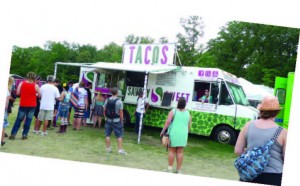 People line up in front of Savory and Sweet at a special event in Knoxville, Tenn. Currently, food trucks are not allowed downtown in Knoxville except at special events. Owner Byron Sambat doesn’t understand why the East Coast and Midwest have had a rougher time integrating food trucks than the West Coast, where the trucks receive greater leeway.

Knoxville is just starting to welcome food trucks, beginning with one truck last year. That one was followed in March by the Savory and Sweet Truck, operated by Byron and Niksha Sambat.

“The movement is still in the works. There are only three real food trucks and a few taco trucks. I’m sure we will see more pop up since food trucks are proving to be viable as businesses in the area,” Byron said, adding that he and his wife get quite a few inquiries from people about their business.

As the movement gets settled, Knoxville has begun the process of rewriting laws that have stood for 20 to 30 years. It’s using Nashville, Tenn.’s new Mobile Food Pilot Program as a model.

Nashville has a new food-vendor fee system in the works, too. The plan is to have money go to the public works department.

Currently, Knoxville does not allow food trucks downtown. Byron noted there are exceptions to the ordinance, though, which includes working through the Office of Special Events to participate in farmer’s markets, festivals and the like. Another option available to food truck vendors is to park on private property, such as parking lots, with the permission of the property owner. That option also often entails paying for the spaces the truck takes up. With this arrangement, only occasional complaints have brought up issues with police.

Byron said there has been very little upfront confrontation between vendors and restaurant owners. The Sambats were told they could no longer attend a small farmer’s market on Wednesdays due to complaints, but they can still attend a larger farmer’s market that takes place on Saturdays.

“The city seems to want to work with us and work out a solution for everyone,” he said. The city hopes to have the laws passed by fall.

He’s heard through the grapevine that restaurant owners want a stipulation that would prevent food truck vendors from setting up within 250 feet of brick-and-mortar restaurants. That concerns him. “I don’t like that it excludes the whole downtown area. If something like that passes, what does it mean for special events — will there be exceptions?”

After visiting Nashville to check out their system, where food trucks seemed to be everywhere, he’s not too concerned, though. In fact, he and his wife are planning to open their second food truck soon. “I suspect next year there will be quite a few more on the road. People are very receptive.”